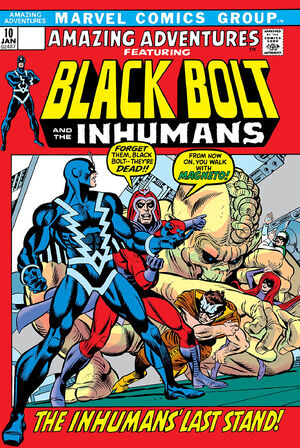 Careful puny one -- lest you shove just a touch too hard -- and it becomes neccessary -- for Gorgon to break you.

Magneto uses a machine to further develop the powers of one of his mutants in order that the mutant can enslave Black Bolt's will as Magneto wishes to use him as an ally in assaulting a government research facility developing a new cosmic power source. Black Bolt only pretends to succumb, and when the royal family escape the energy cage they had been placed in, they reunite in order to defeat Magneto.

Retrieved from "https://heykidscomics.fandom.com/wiki/Amazing_Adventures_Vol_2_10?oldid=1477351"
Community content is available under CC-BY-SA unless otherwise noted.