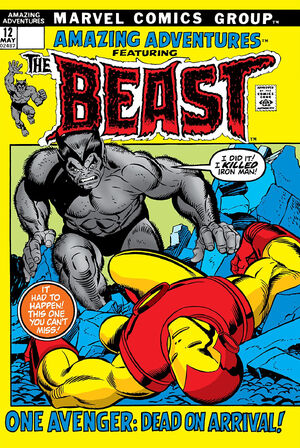 The military is out looking for the Beast in connection with the death of Carl Maddicks, scientist working for the Brant Corporation, and unknown to everyone secretly giving secrets to a enemy organization. While hiding out, Beast reflects back on the events that led to him turning into a hairy beast and how he cannot change back to his normal form. As he is hiding, the Beast is contacted telepathically by Marvel Girl and Professor X who are trying to check in on Hank since the X-Men have gone into hiding due to an increase of anti-mutant hysteria. Hank refuses their probes and hides the truth about his current form from his former comrades. Depressed because of his plight and the fact that he pushed away his only friends, Hank wanders about the Brant compound and realizes that he can continue a somewhat normal life by creating a disguise.

Reading up on make-up effects, Hank takes a day off work and goes out and makes a synthetic mask and gloves to give him an outwardly human appearance when wearing clothes, and building a harness to correct his posture to his formal stature. Exhausted, but satisfied that he can pose as relatively human the Beast retires for the remainder of the night. The next day, Hank returns to work and nobody is the wiser, not even his current romantic interest Linda Donaldson. Retiring to his lab, Hank works like a man possessed trying to find a cure for his condition, shouting at anyone who interrupts his work. However, when Mr. Grant calls Hank to tell him that Tony Stark and his fiancee Marianne Rogers are visiting the Brant Corporation, Hank tries to avoid the meeting, however he cannot convince Mr. Grant to cancel the visit.

Stark explains to Hank that Stark Industries is looking to get into genetic research and has found Hank's work on the subject intriguing. They are interrupted by the arrival of Linda Donaldson who has come to take Hank out for lunch. Linda, who is secretly working for the same subversive organization as Maddicks, curses her luck for being unable to hook-up with Stark and steal secrets from him, and excuses herself. Picking up something with her esper powers, Marianne makes a passing comment that something isn't right about Linda. This causes Hank to get insulted and angry and storms out on Stark and Rogers in order to catch up to Linda and having lunch with her. Deciding to skip lunch to sit on a park bench, Hank has to quickly change his mind when Linda tries to kiss him and he realizes that she might discover his face is really just a latex mask.

That night, Hank takes off his disguise and blows off steam by roaming around the Brand Corporation lot. While out, he spots the arrival of Iron Man, and believes that Stark's "bodyguard" is there to investigate Linda. Hank decides to defend her, not wishing his current love interest to be hounded like he has his entire life, and attacks the golden avenger. While the Beast has the upper hand, Iron Man ultimately manages to knock out the furry mutant. When Linda and the military guards arrive at the scene, they distract Iron Man long enough for the Beast to revive and renew his attack.

When the military attempt to stop the Beast by shooting him only works to make the Beast more angry than ever. Deciding to give into his animal side, the Beast savagely attacks Iron Man. When the hero begs the Beast to stop his attack, Beast refuses and announces that he is going to kill this night. Fighting off the soldiers, he goes back to check on Iron Man. Finding that Iron Man has no heart beat, Hank snaps out of his bloodlust and realizes what he's done. Horrified that he has killed someone, Hank then jumps out of a window and seeks hiding. However, as it turns out Iron Man is alive and well, and that Beast did not kill him as he thought, but merely a hallucination on the Beast's part. Reflecting on the encounter, Iron Man tells all gathered that after getting a close look at the Beast's face he saw a man who is clearly tormented.

Just outside the Brant Corporation are Mastermind, Unus the Untouchable, and the Blob. Mastermind had created the illusion of Iron Man's death in the hopes of manipulating the Beast into joining their new Brotherhood of Evil Mutants.

Retrieved from "https://heykidscomics.fandom.com/wiki/Amazing_Adventures_Vol_2_12?oldid=1720602"
Community content is available under CC-BY-SA unless otherwise noted.