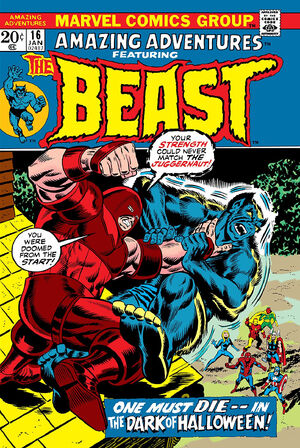 Appearing in "...And the Juggernaut Will Get You... If You Don't Watch Out!"Edit

Synopsis for "...And the Juggernaut Will Get You... If You Don't Watch Out!"Edit

On the way to their friend Tom Fagan in Rutland, Vermont, Marvel Bullpen members Roy Thomas, his wife Jeannie, Steve Englehart, Gerry Conway, Len Wein and his wife Glynis are startled into a stop when the Beast jumps into the path of their car. Beast darts into the woods where he changes back into his civilian guise of Hank McCoy and reunites with his old girlfriend Vera Cantor to tell her that he managed to flag down a car to finish their trip. Exiting the woods they introduce themselves to the drivers and manage to hitch a ride with them at least to Rutland.

As they drive off, a portal appears and out pops the Juggernaut who is exhilarated that he is back on Earth. However, his time on Earth is short lived as another portal opens and sucks him back into a mystical void. Hurtled through this void the Juggernaut a voice appears in his head explaining what is happening. It tells him that after the X-Men banished him to the Crimson Cosmos, and his encounter with Dr. Strange and Eternity found him hurled into oblivion. The voice explains that Dr. Strange's recent visit to Rutland with the Defenders and the Beast currently being in the area has made a mystical anchor between the Juggernaut and Earth. The voice goes on to explain as the midnight hour draws nearer his connection to Earth would increase due a combination of his enemies, his desire for revenge, the mystical properties of Rutland, Vermont, and it being Halloween, he will be returned to Earth and revenge against those who have defeated him in the past.

Meanwhile, the comic writers drop Hank and Vera off in Rutland, apologizing that they cannot bring them to Tom Fagan's party because it's invite only. Hank decides that they can spend the time in Rutland to enjoy the parade before continuing on their travels. When he presses Vera about why he has sought her out, all she can tell him that she needs a geneticist of his skill with her current problem. Watching the parade, they are confronted by Glynis and Len Wein who have managed to get invitations for Vera and Hank and ask them to come to the party. Hank and Vera decline as they must continue their travels.

Just then the Juggernaut appears in the middle of the parade and goes on a rampage briefly before he is pulled into a portal once more vowing that he will return once again. Realizing that Glynis is missing after the attack Len runs off to find her while Hank tells Vera to go to a nearby Motel and check in while Hank goes to investigate. Changing out of his disguise, the Beast begins tracking the Juggernaut. The Juggernaut reappears in the woods and attacks the Beast. The Beast attempts to pull off the Juggernauts helmet but this proves to be easier said than done.

Completely outmatched against the Juggernaut, Hank escapes and changes back into his human disguise and seeks refuge at Tom Fagan's costume party. However, having locked onto Beast's emanations, the Juggernaut tracks Hank to the party and smashes through the walls to try and find his foe. Making a break for it, Hank runs up to the upstairs attic. Hanks feigns being scared when the Juggernaut follows him. When Juggernaut orders Hank to face him, Hank does pulling off his synthetic mask revealing to the Juggernaut that Hank is really a beast and he was not wearing a costume. Startled by this realization, the Juggernaut is easily knocked down the stairs by Hank, jarring loose his helmet.

As the clock tolls midnight, the Juggernaut claims that he is doomed and attempts to flee with Beast following not far behind. In the confusion the comic writers decide to get out of there and continue looking for Glynis. However, their ride is taken by the Juggernaut who tries to flee. However, when the car refuses to start the Beast resumes his attack. He realizes that as the fight progresses the Juggernaut rapidly ages. Stopping the fight, the Beast learns from the Juggernaut that his time in oblivion cause him to age rapidly and the only thing that could prevent/reverse this process was his hate. However, now that the hate had reverted to fear he has begun to rapidly age to oblivion. However, before he can perish, the portal appears once again and sucks the Juggernaut away. As Hank wanders off to ponder things, Glynis is reunited with her husband and their friends and they decide to leave.

Hank and Vera's travels are continued in Incredible Hulk #167....

Retrieved from "https://heykidscomics.fandom.com/wiki/Amazing_Adventures_Vol_2_16?oldid=1711845"
Community content is available under CC-BY-SA unless otherwise noted.