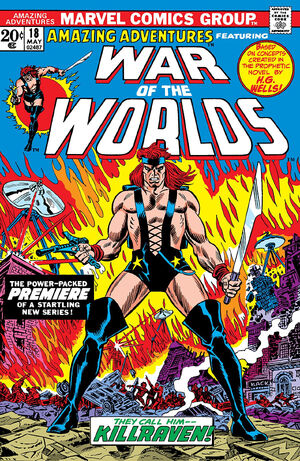 They taught us all the ancient arts—swordplay, karate, savate, wrestling—at first we thought it a game—a game with deadly results.

Appearing in "The War of the Worlds!"Edit

Synopsis for "The War of the Worlds!"Edit

New York City, 2018 AD. Killraven fights his way through a subway tunnel against a gang led by Scrapper. He enters an empty Grand Central Station to find the Keeper, who unleashes a few mutants against him. Killraven blasts a hole in the Keeper's wall, thus emptying his weapon. While the Keeper shoots at him, he throws a sharp piece of machinery and impales his enemy. Astonishingly, the man thanks him and tells him a story.

In 1901 the Martians invaded Earth. Despite their technological advantage, they failed to account for illnesses against which they had no immunity, and the invaders all died. In 2001 they invaded again. This time they had a defense against terrestrial disease and even against nuclear weapons. The second war of the worlds ended quickly. Humans fled the cities, among them Maureen Raven with her two sons. On Welfare Island they met Doctor Ann Carver, who sheltered them in a hospital for two weeks. A chopper arrived with three humans inside, but instead of rescuing them, a soldier shot the two women. Doctor Raker (later the Keeper) took the older brother, Jonathan, while a soldier named Saunders was supposed to kill the younger.

Killraven knows the rest of the story. Jonathan Raven grew up a gladiator, fighting for the amusement of the Martians, and took the name Killraven. Seven years ago he escaped. He spent a year in Queens, where he learned about human civilization from books. He also learned to avoid even looking at sirens, women to whom the Martians gave the ability to bewitch men. One day he accidentally killed a chieftain's friend in Brooklyn Heights. He fled to Staten Island, joined a group of freemen, and eventually became their leader.

Raker confesses that the Martians used some kind of mind control on him, but now that he is dying, their control is broken. "You can ... destroy them ... you have the power," he says.

Puzzled, Killraven doesn't detect the mutant who attacks him from behind, but he quickly disposes of it. Another sound alerts him to a new menace. He turns to confront three sirens ... and he has already looked at them ....

Retrieved from "https://heykidscomics.fandom.com/wiki/Amazing_Adventures_Vol_2_18?oldid=1502675"
Community content is available under CC-BY-SA unless otherwise noted.