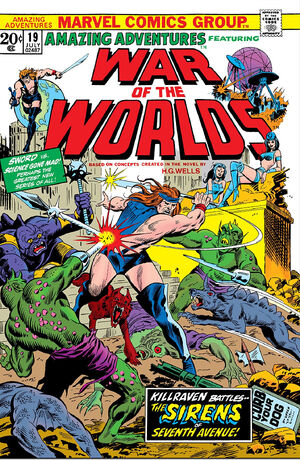 Appearing in "The Sirens of 7th Ave"Edit

Synopsis for "The Sirens of 7th Ave"Edit

Killraven confronts three sirens, women who have the power to lure men into the clutches of the Martian invaders. He realizes that they cannot affect him, perhaps in the same way that the robot scanners cannot detect him. A group of mutants pouring out of Grand Central Station tries to ambush him. Killraven fights them, and the sirens slip away in the confusion.

M'Shulla and Hawk, two members of Killraven's group of freemen, descend from a fire escape and help Killraven polish off the mutants. A Martian tripod appears. The freemen run to a church that they've used for a stable, mount their horses, and try to escape. In their flight they rouse a mutant alligator. Killraven goads it with a series of silver stars (shurikens); it chases him between the legs of the tripod, and both are destroyed.

They reach the docks, where Arrow (another freeman) points out that a ferry full of slaves has just arrived. They subdue the crew and hijack the ferry. On their way across the bay, another tripod appears. Killraven orders full speed astern. The ferry rams into the tripod and destroys it. In New Jersey, Professor Kempleton notes the loss of a second tripod; he informs a Martian because he wants to continue his RNA research. The Martian orders a scout flyer launched to investigate the "rebels." The scout reports the ferry ablaze off Staten Island, the freemen base. The Martian orders the Siren be sent there.

When Killraven returns to his base, he finds the sentries gone. No one responds to his call, except for Skarlet, queen of the Sirens. He does not respond to her, so she calls up a small tripod, which restrains him. In a small boat, Skarlet takes him back to Manhattan and to Madison Square Garden. Another Martian tells him he must fight Slasher, another mutant with a bionic arm, in the gladiator pit. Killraven rips out of his restraints and subdues the mutant. M'Shulla calls from a cell leading into the pit. Killraven frees him and the other freemen. The Martian has escaped. Outside, Killraven vows that "they began ... but man will end ... the war of the worlds!"

Retrieved from "https://heykidscomics.fandom.com/wiki/Amazing_Adventures_Vol_2_19?oldid=366925"
Community content is available under CC-BY-SA unless otherwise noted.