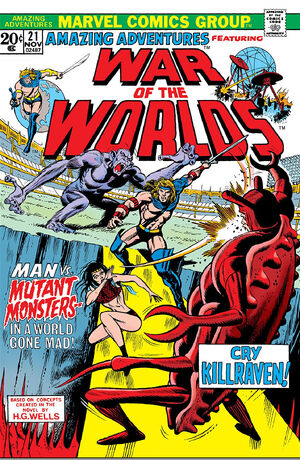 When this is over ... we will come back here, and this place will become as it was—a place of summer afternoons!

Appearing in "The Mutant Slayers!"Edit

Synopsis for "The Mutant Slayers!"Edit

The Warlord and Carmilla Frost, a molecular biologist, watch Killraven fighting off their soldiers in their Alteration Division lab. Frost sends a squad of mutants into the fray, but they fare little better. Warlord steps in and brings Killraven down with a metal fist.

Killraven awakens in another lab, strapped to a table. The Warlord tells him that the Martians need new bodies to withstand Earth's heavier gravity and that he is the latest guinea pig. Frost takes the Warlord aside and suggests that Killraven might lead them to other groups of freemen. In the dungeons, the other freemen in Killraven's band try unsuccessfully to escape. Frost goes to her lab to get a cloned mutant named Grok; they subdue the dungeon guards and free the freemen.

Back in the lab, the doctors start to operate on Killraven with a laser scalpel. The freemen arrive and free Killraven. Frost leads them through tunnels to the surface, to a place they've never heard of—Yankee Stadium. The infield is now a pit full of spikes, crossed by a narrow causeway to the only exit. Killraven crosses the causeway and encounters a large crab-like mutant. More hungry mutants pour forth. Warlord and some soldiers appear in the stands.

Grok helps Killraven defeat the crab mutant. Warlord dives out of the stands for a final battle with Killraven, who knocks him down and dissolves his cyborg arm in the crab mutant's acidic spittle. The freemen escape and lay low in the 161st Street subway station.

Retrieved from "https://heykidscomics.fandom.com/wiki/Amazing_Adventures_Vol_2_21?oldid=1502676"
Community content is available under CC-BY-SA unless otherwise noted.