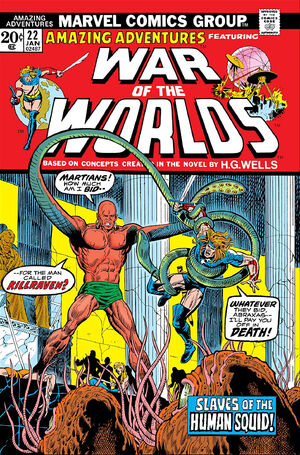 Come, sisters! They've turned this place into a living hell! It'll be a suitable place for them to die! They won't have to travel far!

Killraven and his freemen ride a tugboat up the Potomac River. Without warning, a kraken-like creature seizes their boat. With sword and crossbow, Killraven and M'Sulla finish it off. Old Skull and Hawk make it ashore, only to be captured by the Cavaliers, a band of slavers. Killraven confronts Carmilla Frost, whose motives are still unclear and who didn't warn them about (or either didn't know about) the slavers. They camp beneath the crumbling Washington Monument. While Killraven looks for a trace of the captives, Frost tells M'Shulla that she learned molecular biology from her father, who turned against the Martian invaders.

When Killraven returns, he sees a figure pointing a gun at M'Shulla and Frost. He tackles a green woman whose gun fires shurikens. Her name is Mint Julep, and her band of freewomen has also lost members to the slavers. She accompanies the freemen to the Lincoln Memorial, where they get through the perimeter by taking out a few guards. At the monument, they find Abraxas auctioning Old Skull off to a group of Martians. The freemen interrupt the auction. Julep frees her freewomen, while Sabre spars with Killraven. Suddenly Abraxas siezes Killraven and throws him to the Martians!

Retrieved from "https://heykidscomics.fandom.com/wiki/Amazing_Adventures_Vol_2_22?oldid=1676732"
Community content is available under CC-BY-SA unless otherwise noted.