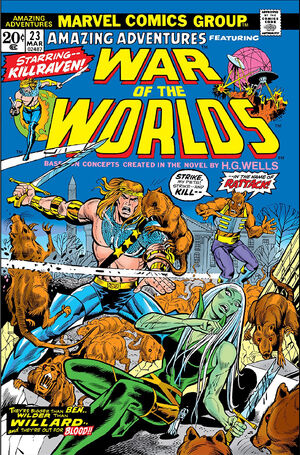 You know, ever since I teamed up with K.R., life seems like it's just one rescue mission after another.

Appearing in "The Legend Assassins!"Edit

Synopsis for "The Legend Assassins!"Edit

Killraven dangles from the tentacles of a Martian at the foot of the Lincoln Memorial. Two tripods approach. Killraven slices off one of the tentacles. A Martian says, "We would tear your quivering flesh apart were it not for your political importance!" Old Skull sees Killraven in trouble and knocks M'Shulla down when he tries to block the way. Before M'Shulla can get up, Grok and Carmilla Frost finish off two slavers who threaten him. Old Skull gets past the others, but he is too late—the tripods have carried away Killraven. Mint Julep tells him that she knows where they took Killraven. The freemen escape.

At the White House, Killraven faces the Martian High Overlord, who sentences him to be staked out in the tunnels below. In those tunnels, Rattack tells his rodent companions that he used to be a government agent, before the biological weapons used against the invading Martians changed him.

At the Pentagon, the refuge of Julep's freewomen, she tells the freemen that Killraven is at the White House and that the only safe approach is through the tunnels. The High Overlord tells Killraven, now staked out, that his death will be transmitted through a mural phonics system, which will pick up his feelings as well as sight and sound. To taunt him, they hang his sword nearby. The Martians and their slaves leave. An army of hungry rats emerges from the darkness and begins to feed on Killraven!

Retrieved from "https://heykidscomics.fandom.com/wiki/Amazing_Adventures_Vol_2_23?oldid=1502668"
Community content is available under CC-BY-SA unless otherwise noted.