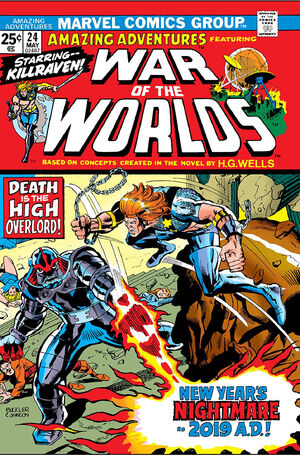 Ah, Killraven, why did you have to come along? Life was so much less complex before ... and also healthier!

Appearing in "For He's a Jolly Dead Rebel!"Edit

Synopsis for "For He's a Jolly Dead Rebel!"Edit

New Year's Eve, 2018 AD. Killraven and his freemen, along with Mint Julep and her freewomen, fight their way through the catacombs underneath the White House, which is now the headquarters of the Martian invaders. One of the vampire bats catches Carmilla Frost off guard and almost bites her throat, but M'Shulla kills it with a precision crossbow shot. Mint Julep finds a door into the archives. Frost notes that it's New Year's Eve, but Killraven says there's little cause for celebration.

In his command post, the High Overlord receives reports from the sensor-matronics system: several humans are in the catacombs. He calls Abraxas, who is at the slave market at the Lincoln Memorial, on the vis-com system and tells him to capture Killraven. Abraxas orders Sabre to take his Cavaliers to the catacombs.

Killraven finds an audio tape labeled 4/15/72. He tosses it to Frost, who wants to use it as a streamer. Elsewhere in the catacombs, Rattack mourns the rats that Killraven killed. The freepersons exchange anecdotes at their New Year's "party," but they are rudely interrupted by Sabre, who wings Killraven in the arm. Sabre marches his captives away. Rattack and his army of rats arrive soon afterward. The rats catch the scent of Killraven's blood and trail him.

Abraxas throws Rattack aside, his flesh ripped by the suction cups of Abraxas's arms. The rats smell blood and tear Rattack to pieces. The statue of Abraham Lincoln topples and buries Abraxas. Sabre disappears. The High Overlord is buried in the rubble, but he has already started to dig himself out when the freepersons leave.

Retrieved from "https://heykidscomics.fandom.com/wiki/Amazing_Adventures_Vol_2_24?oldid=1502677"
Community content is available under CC-BY-SA unless otherwise noted.