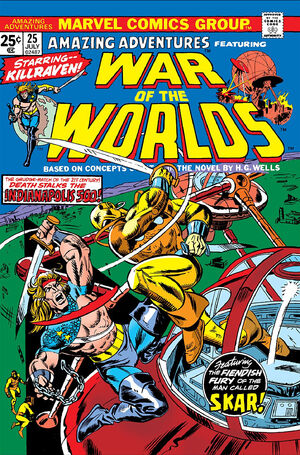 The masters ridicule our mental patterns ... but they know what those patterns are, believe me. And they know how to distort our basic impulses, twist them, use them against us—until they gain the ends they want!

Appearing in "The Devil's Marauder"Edit

Synopsis for "The Devil's Marauder"Edit

While traveling across Indiana in a dyna-glider, Killraven spots a new type of tripod in the act of killing a human. He leaps onto the canopy. Skar, the driver, uses a bladed tripod leg to cut his back. Killraven tries to break through the canopy, but the surface turns hot, and he falls. The blade cuts him again on his way down. Skar apparently assumes Killraven is dead and leaves. Watching the tripod walk away, Killraven has his first clairsentient episode— he sees the Indianapolis Speedway through someone else's eyes, but only for a moment.

Around the campfire that night, Killraven, M'Shulla, Carmilla Frost, and Hawk discuss their destination: Yellowstone Park. Frost says that they should think about larger questions beyond revenge on the Martians. Killraven won't hear it. M'Shulla defends her and offers to leave the group.

The racetrack, to which Killraven leads his freemen the next day, is now a testing ground for new Martian tripods. He and M'Shulla sneak into the garage, where he meets a technician named Hobie. Hobie experienced the mural phonics broadcast of Killraven's "execution" in Washington (in issue 23) and caught his revolutionary fervor. He helps Killraven hijack one of the tripods and asks to join him. Killraven promises to come back for him. On the track Killraven's tripod catches up to Skar's. Killraven makes a suicidal leap to Skar's tripod and uses a chain to break the canopy. Once inside, he and Skar battle. The tripod, without a driver, leaves the track and crashes into the garage. From the roof Killraven watches as Hobie runs out ... and then as a wall collapses on him. Skar survives, but without a working tripod he must let the freemen escape.

Appearing in "Are You Ready for the... Impossible?"Edit

Synopsis for "Are You Ready for the... Impossible?"Edit

The last three pages reprint a story from Journey Into Unknown Worlds #56.

Retrieved from "https://heykidscomics.fandom.com/wiki/Amazing_Adventures_Vol_2_25?oldid=1502666"
Community content is available under CC-BY-SA unless otherwise noted.