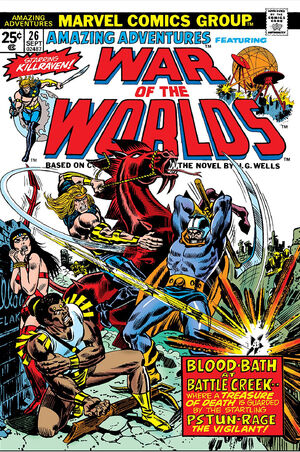 You know .. and I know ... how stubborn K.R. is—and I got a feelin' he just met up with a creature with as vile a nature as his!

-- M'Shulla referring to the reptilian stallion

Appearing in "Something Worth Dying For!"Edit

Synopsis for "Something Worth Dying For!"Edit

Battle Creek, Michigan, late February 2019. The freemen, on their way to Yellowstone, come across a herd of mutant horses that have the tongues and spikes of reptiles. Killraven drops from a dyna-glider onto the back of a horse, determined to have it for a mount. Their two dyna-gliders have come from Washington, D.C., but the power cells are almost exhausted.

In camp that night, the horse has a bridle. M'Shulla finds a wanted poster with Killraven's picture. Hawk wonders again why they're going to Yellowstone. The Martian High Overlord, according to Killraven, said that a Doctor Saunders was there, and a keeper named Saunders killed Killraven's mother and took his brother.

Carmilla Frost, bathing in a nearby creek, encounters two uniformed men from Battle Creek. Grok kills one. Frost takes the other prisoner. More militiamen attack the freemen camp. One of Killraven's silver stars kills the leader, Racque. Hawk picks up Racque's M23 Thermal Incinerator and throws it to Killraven, who fires at the attackers. All of them die in the explosion. The prisoner, Foropulist, tells them about the Treasure of Battle Creek and their leader, Pstun-Rage the Vigilant.

Next morning, Killraven and a reluctant M'Shulla mount the reptilian stallion. Killraven asks M'Shulla who keeps writing "Killraven was here" on the wanted posters. "Now how would I know?" answers M'Shulla. On their way through the ruins of Battle Creek, they are shadowed by an increasing number of militiamen.

Appearing in "The World of Flame!"Edit

Synopsis for "The World of Flame!"Edit

Retrieved from "https://heykidscomics.fandom.com/wiki/Amazing_Adventures_Vol_2_26?oldid=1502678"
Community content is available under CC-BY-SA unless otherwise noted.