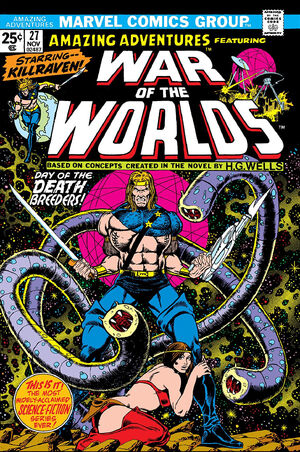 You haven't seen anything... yet!

Appearing in "The Death Breeders"Edit

Synopsis for "The Death Breeders"Edit

March 2019. Killraven and his band of freemen are crossing Lake Michigan on an ice catamaran. Two huge sea lampreys break through the ice and attack. One plants its sucker on Grok's back. Carmilla Frost tries to rescue him. The other lamprey knocks M'Shulla's crossbow out of his hands before he can fire. Hawk pulls Frost away from her useless attack, but she slugs him. Killraven kills the other lamprey with a harpoon gun, then swings above the first one and hits it with a silver star so that Grok won't also be killed. As it stands, Grok barely survived.

In Chicago, the Martians have replaced the Loop with Central Command, which is only the hub of Death-Birth, a research center and slave pen. In Indianapolis, the High Overlord interrogates Skar about his encounter with Killraven (in issue #25). Skar gladly accepts a mission to track down Killraven.

The freemen reach Milwaukee. Killraven brings ashore two reptilian stallions that he insisted on keeping. While Frost tends to Grok and M'Shulla tends to them both, Hawk and Killraven speculate on whether M'Shulla's concern will decrease his value to the group. Someone hiding behind an ice sheet fires two incendiary spears at Killraven, and Hawk fires back. Killraven calls to his assailant. Out steps Volcana Ash, who says she would have killed them if they'd been Death Breeders. Killraven has another clairsentient episode: he sees a pair of slaves in Death-Birth named Adam 3,031 and Eve 3,031, and how Atalon the Fear Master humiliates them. The episode ends.

A Martian tripod appears. Ash and the men lead it away from Grok and Frost and hide in a brewery. The tripod fires on the building. Death Breeders (men in skeleton costumes) drop from the tripod. Killraven climbs to the roof, where one of the Death Breeders ambushes him. Killraven levers his attacker into a beer vat below and drops a handful of silver stars after him. The vat bursts. The beer spills into the street. The tripod loses its footing and crashes. Killraven vows that "all the demons in hell won't stop me from storming the fortress of Death-Birth!"

The last three pages reprint a story from Journey Into Unknown Worlds #47.

Retrieved from "https://heykidscomics.fandom.com/wiki/Amazing_Adventures_Vol_2_27?oldid=1502679"
Community content is available under CC-BY-SA unless otherwise noted.