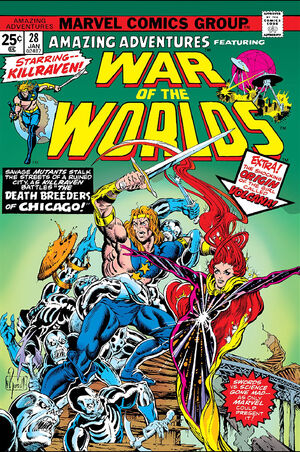 I became the macrocosm ... I was the universe conceiving planets ... mother to the dawning of galaxies!

-- Volcana Ash on gaining her powers

Appearing in "The Death Merchant!"Edit

Synopsis for "The Death Merchant!"Edit

April 2019. Meig's Airfield, Chicago. M'Shulla fishes through the ice of Lake Michigan. He gets a bite, but the fish is a giant mutant salmon, and it bites him. Volcana Ash blasts it. M'Shulla goes to Carmilla Frost to have his wound dressed. She tells him that Grok is dying from internal bleeding. Meanwhile, Ash tells Killraven about her past. She and her sister, Meloney (or Melonie), were separated when the Martians attacked. Ash became a test subject in a laboratory, where radiation treatments gave her the power to control heat. She used that power to escape. Meloney became a breeder, one of thousands of Eves producing children for the Martians. Killraven tells her, "The Martians have acquired a taste for Earthlings!"

In Death-Birth, Eve 3,031 and Adam 3,031 face giving up their soon-to-be-born child to Atalon the Fear Master. Adam 3,031 manages to kick Atalon, who orders the Death Breeders to take him away for execution. On their way to the Sacrificer, Atalon shows Eve 3,031 the banquet hall.

Skar has followed the freemen's trail to Battle Creek, Michigan. He interrogates Foropulist, who knows nothing, and kills him.

Killraven, Old Skull, Hawk, and Ash approach Death-Birth on the El. Three Death Breeders have brought Adam 3,031 out here for his execution. The freemen easily dispatch them. Killraven recognizes Adam 3,031 from his last clairsentient episode (last issue) and has another: he sees Eve 3,031 about to give up her child. They hurry to Death-Birth and interrupt the Martians in their banquet hall.

Killraven stabs a Martian. He has a clairsentient episode in which he is dying ... and he realizes that his episodes have all involved seeing through the eyes of Martians.

Ash finishes off the other Martians. They hurry to the Sacrificer's operating room and rescue Eve 3,031 and her child.

Retrieved from "https://heykidscomics.fandom.com/wiki/Amazing_Adventures_Vol_2_28?oldid=1502680"
Community content is available under CC-BY-SA unless otherwise noted.