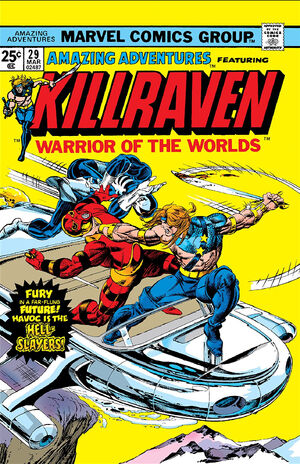 Our race is so ... so wearisome ... in its tedious, narrow vision. They fail to realize the superiority of the Martians. The Masters are beyond the simplicity of mere intellect!

Appearing in "The Hell Destroyers"Edit

Synopsis for "The Hell Destroyers"Edit

Chicago, April 2019. Killraven and his freemen have rescued the pregnant Eve 3,031 from Atalon the Fear Master and the Sacrificer. They leave the Sacrificer's clinic and ride down a pneumatic chute. Killraven uses the Holographic Megaphone to address the other Adams and Eves held prisoner outside Death-Birth, telling them to flee once their cell walls come down. Volcana Ash leaves to find her sister, who is one of the Eves, but Melonie does not recognize her. Adam 3,031 uses the Molecule Disruptor to make the prison disappear.

Atalon summons the Death Breeders and tells them to attack the fleeing prisoners, hoping that Killraven will stop to defend them and leave himself open for capture. The freemen find the Crucible Center, where they intend to overload the fusion reactor and destroy Death-Birth. The Crucible Guardians attack them. The fight is brief. Killraven stabs an ionic blade into a reactor conduit. A chain reaction begins. The freemen escape in snow skimmers just before the building explodes.

Back at Meigs Airfield, M'Shulla and Carmilla Frost discuss Grok's condition, which is unchanged (he was badly wounded in issue #27). Frost is about to tell M'Shulla about her connection to Grok when Killraven arrives. Killraven mounts his serpent-stallion, while the others continue on in the snow skimmers. The Death Breeders catch up to them. Killraven rides to the edge of a cliff, where he seems to be trapped. He leaps from his mount into a Death Breeder's skimmer as it goes over the cliff, and leaps again into M'Shulla's skimmer. Ash blasts the other pursuing skimmers.

Retrieved from "https://heykidscomics.fandom.com/wiki/Amazing_Adventures_Vol_2_29?oldid=1502667"
Community content is available under CC-BY-SA unless otherwise noted.