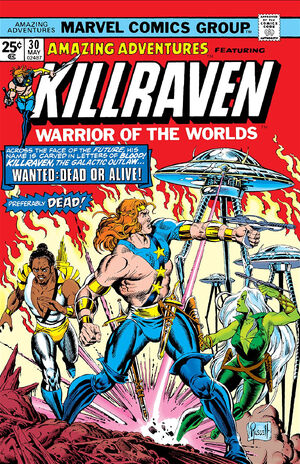 Appearing in "The Rebels of January and Beyond!"Edit

Synopsis for "The Rebels of January and Beyond!"Edit

April 2019: The High Overlord is called to his Martian superiors in Washington D.C. to provide a report on the battle between him and Killraven back in January.

With his report, Overlord provides profiles of Killraven, M'Shulla, and Mint Julep to his superiors. Afterwards, he concludes that while all escaped the battle, the primary concern should be towards Killraven, who's charisma and character could inspire the humans to revolt against their master.

Retrieved from "https://heykidscomics.fandom.com/wiki/Amazing_Adventures_Vol_2_30?oldid=1410076"
Community content is available under CC-BY-SA unless otherwise noted.