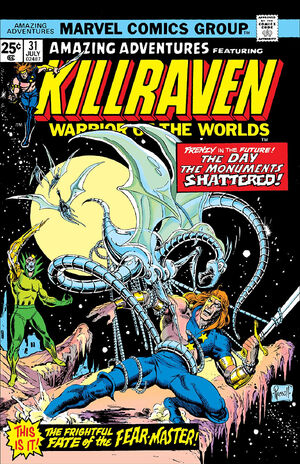 Appearing in "The Day the Monuments Shattered"Edit

Synopsis for "The Day the Monuments Shattered"Edit

As Eve 3031 is about to give birth to her child, Killraven and his Freemen fight off an attack made by the Death-Birth's Death Trackers which have come to destroy them. As the Freemen fight off the creatures, Sacrificer and Atalon have their troops prepare for their next attack. While in Milwaukee, Skar continues his hunt for Killraven, scarring a ship captain who'd been trapped in the frozen waters.

While back in Missouri, as Adam and Eve continue to struggle with their child's birth, M'Shulla and Carmilla watch over the dying Grok and give in to their passions. Later, their downtime is interrupted with the arrival of Scarificer and Atalon, who have arrived with the giant beast, the Devourer. After a long fight the Freemen are able to kill the beast when Killraven blasts loose an impaling stalactite from the cavern wall, and later kills Sacrificer in battle. While Atalon makes his way to where Adam and Eve are birthing their child, Adam defends his mate until Volcana Ash arrives and kills him.

After, Eve successfuly births their child and the two depart from Killraven's company, thanking him and his Freemen for all their help.

Retrieved from "https://heykidscomics.fandom.com/wiki/Amazing_Adventures_Vol_2_31?oldid=1410077"
Community content is available under CC-BY-SA unless otherwise noted.