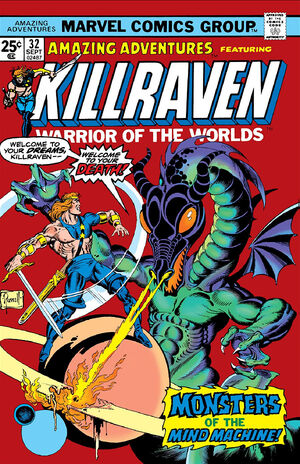 Appearing in "Only the Computer Shows Me Any Respect!"Edit

Synopsis for "Only the Computer Shows Me Any Respect!"Edit

June 2019, Nashville Tennessee: Killraven and his Freemen have arrived before the Octotympanum-Viewscope building. In the 1990's it was a device which could make your own fantasies a reality. There they find that the device still works and Old Skull particularly enjoys the lucid creations and cute creatures the device can create for them.

As the tired Freemen rest, they check on Grok who is still on death's door, and Hawk tells of the rift between him and his father in the days before the Martian invasion caused by his father's addiction to the Octotympanum-Viewscope simulations of Sherlock Holmes adventures.

Realizing that Old Skull has once more ventured into the device, Killraven goes after him to find that the device had created a menacing dragon to attack the both of them. Killraven tries to fight off the beast to no effect, however the threat is soon ended when M'Shulla is able to find the controls to the device and shut them off.

Retrieved from "https://heykidscomics.fandom.com/wiki/Amazing_Adventures_Vol_2_32?oldid=1410078"
Community content is available under CC-BY-SA unless otherwise noted.