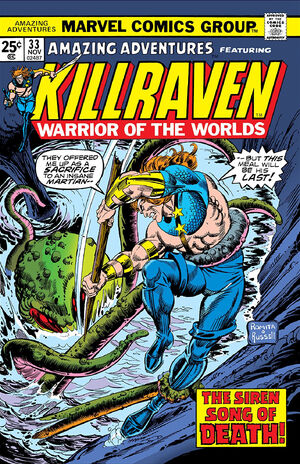 Appearing in "Sing Out Loudly...Death!"Edit

Synopsis for "Sing Out Loudly...Death!"Edit

As spring draws near, Killraven and his Freemen have been out hunting when they realize there are other's tracks in the snow. Returning to the cave they have holed up in, Killraven goes exploring and soon finds himself captured by a band of black men calling themselves the Brothers. Killraven is taken to their leader the Head Man, who tells Killraven about the persecution of his African-American ancestors and how during the Martian invasion, the majority of blacks fled the cities to seek refuge underground and formed their "Brother" nation.

Raised on a culture of hatred of those with white skin, Head Man sentences Killraven to be fed to a giant mutant creature which dwells in the cave water. However, Killraven is freed by dissenting Brother member Chandra who finds Head Man's methods barbaric and the two slay the creature. Convinced by Killraven's inspiring words to continue fighting for freedom, Chandra and his people decide to leave their underground sanctuary and fight like he has, Chandra thanks Killraven and they depart as friends. Killraven then returns to his own friends to find them sleeping peacefully, unaware of the events that occurred.

Retrieved from "https://heykidscomics.fandom.com/wiki/Amazing_Adventures_Vol_2_33?oldid=1410079"
Community content is available under CC-BY-SA unless otherwise noted.