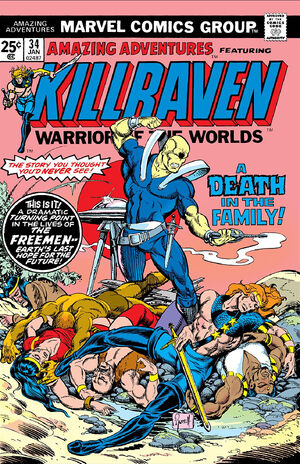 Appearing in "A Death in the Family"Edit

Synopsis for "A Death in the Family"Edit

Chatanooga, Tennessee, July 2019: Killraven and his Freemen continue their track across America when they are finally found and attacked by Skar. While Skar attacks Old Skull who is busy entertaining the recovering Grok, Killraven, M'Shulla and Hawk learn of Carmilla's origins as a Martian slave before hearing the battle and joining the fight.
During the fight both Hawk and Grok are killed in a rock slide. Enraged over the death of two of his friends, Killraven savagely attacks Skar and beats the creature to death, however instead of feeling pain Skar only laughs as he is slowly killed, making Killraven's revenge a hollow one.

Retrieved from "https://heykidscomics.fandom.com/wiki/Amazing_Adventures_Vol_2_34?oldid=1410080"
Community content is available under CC-BY-SA unless otherwise noted.