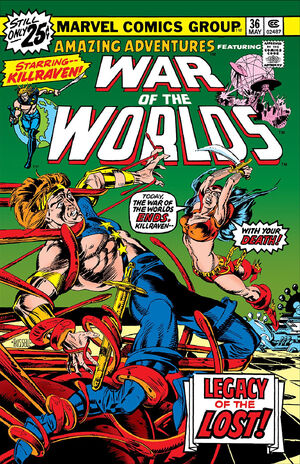 Being given visions of life on Mars, and how the Martian Masters reproduce (asexually), Killraven leads his Freemen to an incubation center for recently spawned Martian children. Meanwhile, learning of Skar's failure and destruction at the hands of Killraven, the High Overlord sends Killraven's own brother Deathraven to destroy his foe once and for all.

Arriving at the incubation base, Killraven and the others come at a moral cross-roads over if they should kill the infantile Martians. Killraven wants them dead because they are Martians, however Carmilla believes that they should have a chance to choose between being peaceful beings or invaders like the other Martians. However, when they are confronted by an army of full grown Martians, forcing them to flee before Killraven can harm any of the young aliens.

They manage to escape the Martian defenders, and Killraven realizes the folly in what he was about to do.

Retrieved from "https://heykidscomics.fandom.com/wiki/Amazing_Adventures_Vol_2_36?oldid=1410081"
Community content is available under CC-BY-SA unless otherwise noted.