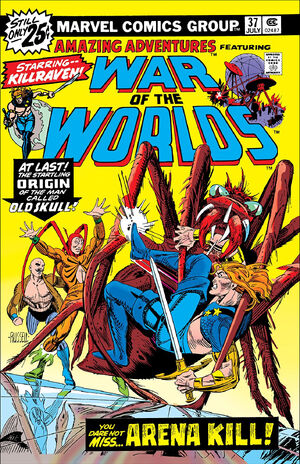 Suwannee River, Okefenokee National Wildlife Refuge, New Years Eve, 2020: Killraven and his band of Freemen have come across the people that reside in the refuge, who have been mostly undisturbed by the Martian Masters due to the environment they dwell in being hard for the Martians to attack. After besting their leader Brother Axe in battle, Killraven and his friends are invited to dine with the people of Suwannee River.

While telling Brother Axe and his people tales of his and Old Skull's days in the Martian gladiator arenas, Killraven's story gets sidetracked as Old Skull begins telling his life story:
Old Skull was the slow-witted son of a cattle rancher prior to the Martian invasion, and it wasn't until his adult years that he was put in the arenas, and it was there that he met his first true friend, Killraven, who stuck up for Old Skull when others would taunt and bully him for being slow. The two reminisce on how they worked together to defeat Warr and his legion of mechanical spiders. Although defeating Warr in combat, the two gladiators refused to kill him for the pleasure of the Martians.

Retrieved from "https://heykidscomics.fandom.com/wiki/Amazing_Adventures_Vol_2_37?oldid=1410082"
Community content is available under CC-BY-SA unless otherwise noted.