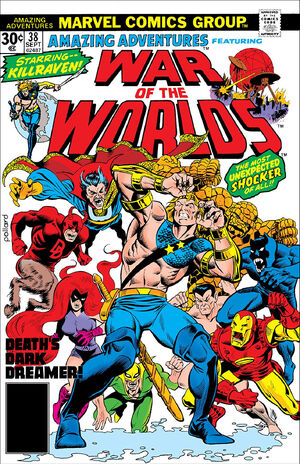 While traveling through the city of Miami on his own, Killraven is drawn into a giant dome which turns out to be the old Miami Museum of Cultural Development. He is lured there by an astronaut who, after a space mission to Mars in the year 1999, found himself bombarded with strange radiation and being put into a coma-like state.

Stored in the museum, the dreaming astronaut sought to bring people to the museum in order to rouse him from his long slumber. In order to do so, he uses the building's holographic and virtual reality devices to create constructs from Earth's heroic age, and many of its now deceased heroes, and forcing Killraven to battle them.

Killraven is able to battle off and defeat the collection of heroes which have been perverted into almost demonic-looking beings. After defeating them all and their leader, an amalgamation of Captain America and President Gerald Ford, Killraven is confronted by the astronaut who has finally awoken from his slumber. Disturbed by the lengths it took to awaken the astronaut and fearing that should he rest more others could be put at risk of his machinations, Killraven kills the astronaut and leaves the museum in disgust.

Retrieved from "https://heykidscomics.fandom.com/wiki/Amazing_Adventures_Vol_2_38?oldid=1410083"
Community content is available under CC-BY-SA unless otherwise noted.