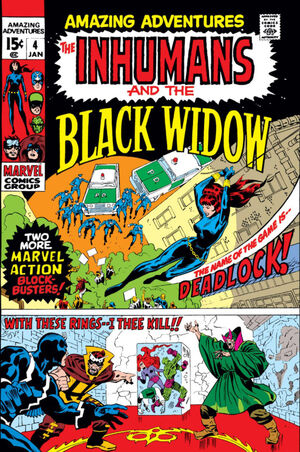 Appearing in "With These Rings, I Thee Kill!"Edit

Synopsis for "With These Rings, I Thee Kill!"Edit

Black Bolt removes the eye from the statute of Yin, but it speeds off as the Mandarin uses one of his rings to draw it to him. The Inhumans split up to set off searching for it and discover the Mandarin just after he has dissolved the sphere and absorbed its power. The Inhumans battle the Mandarin, defeat him, remove his rings and discard them underground while sealing in the cavern.

Retrieved from "https://heykidscomics.fandom.com/wiki/Amazing_Adventures_Vol_2_4?oldid=1653053"
Community content is available under CC-BY-SA unless otherwise noted.