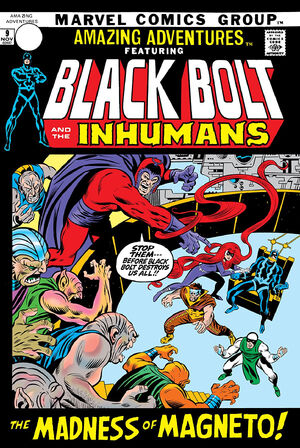 Appearing in "...And the Madness of Magneto!"Edit

Synopsis for "...And the Madness of Magneto!"Edit

Magneto, mistaking Black Bolt and the Inhumans as fellow mutants, captures them in order to utilize their powers in his crusade against humanity.

Retrieved from "https://heykidscomics.fandom.com/wiki/Amazing_Adventures_Vol_2_9?oldid=1410055"
Community content is available under CC-BY-SA unless otherwise noted.