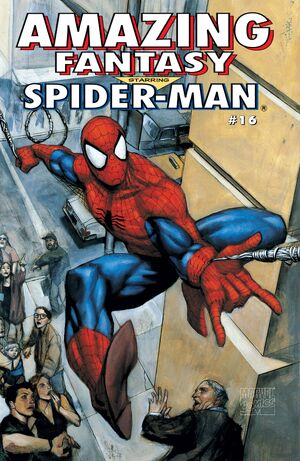 Appearing in "An Amazing World"Edit

Synopsis for "An Amazing World"Edit

The story started with Peter re-capping his very short career at this time including his origin and then a visit to his Uncle Ben's grave with his Aunt May. A crooked furniture salesman trying to make a deal with May excused that Ben ordered some furniture as a surprise to her. Later, as Spider-Man, Peter views the same salesman trying out the same scam on another potential victim. Spider-Man then follows the man to a warehouse where he finds a group of men targeting widows and widowers for financial gain. The group is led by a man named the Undertaker whom Spider-Man confronts. The group of men are soon called upon, armed at this point, and the very first use of his Spider-Sense aids Spider-Man in dodging the gunfire. Confused as to what just happens, Spider-Man begins to attack the group of men with his newly found Spider-Sense. The men are caught and tied up in a neat little package for the police. On his way home, Spider-Man helps out a couple in his first breakup of a hold-up or mugging. The story ends with Aunt May viewing the news of the events on television as a mysterious woman telekinetically moves a tractor upon the top of an construction site seemingly amused at her newly realized powers setting the stage for next issue.

Retrieved from "https://heykidscomics.fandom.com/wiki/Amazing_Fantasy_Vol_1_16?oldid=1717007"
Community content is available under CC-BY-SA unless otherwise noted.