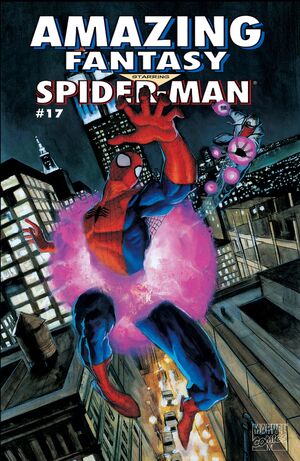 Continued from last issue, the mysterious female at the beginning and end of Amazing Fantasy #16 comes more into focus as we learn that she is named Joey Pulaski who has the ability to fly and use telekinetic powers to move objects. Her and Spider-Man have a good talk together. Before this meeting we see Spider-Man have a talk to Maxie Shiffman, his agent, and takes responsibility over fame and fortune in leaving him. We then turn to a figure in a high rise building who is none other than The Kingpin who wants to take control over a construction company and its management firm and will use an "agent" against the possibility that Spider-Man interferes. Another villain makes his intro as he attempts to talk to Maxie Shiffman in his office and we learn much more about him next issue. Spider-Man next has some trouble with his new friend, Ms. Pulaski as she goes on to destroy parts of the City to free herself from boredom. She offers Spider-Man a job to make some money in protecting a building that The Kingpin has an interest in and is even given a choice in the matter when surrounded by a ball of energy from Joey. He breaks free from the ball but Joey is ordered to kill Spider-Man and nearly does so!. He breaks free to knock Joey out which impresses The Kingpin very much as he stands in the window of a building (like he usually does). Peter is left pondering at the end telling himself I did the right thing".

Retrieved from "https://heykidscomics.fandom.com/wiki/Amazing_Fantasy_Vol_1_17?oldid=1488294"
Community content is available under CC-BY-SA unless otherwise noted.