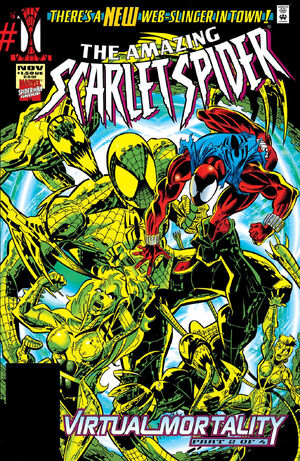 Appearing in "Violated by the Virtual"Edit

Synopsis for "Violated by the Virtual"Edit

When Orlando Kannor tries to steal her new VR visor, Doc Ock blows up the lab, killing her own men. The visor winds up with the Scarlet Spider. Ock confers with the Master Programmer who confirms he can track the visor when activated. Meanwhile. Ock sends a limo to pick up the Looter, just released from prison. At Club Noir, Ben spots Orlando, who tells Mr. Tso he acquired some microchips from the visor fiasco. Tso contacts his associate who thinks the microchips can be useful. Ben brings the visor to Seward who, wearing it, enters cyberspace. VR-37, Ock's virtual reality guardian attacks him, forcing Ben to don Seward's own VR helmet to help. Together they battle manifestations of Stunner, Ock, Venom, and Carnage, who puts a VR spike through Seward's VR head. Ben forces VR-37 off-line and breaks the cyberspace connection, only to find that Seward's real body is now mindless.