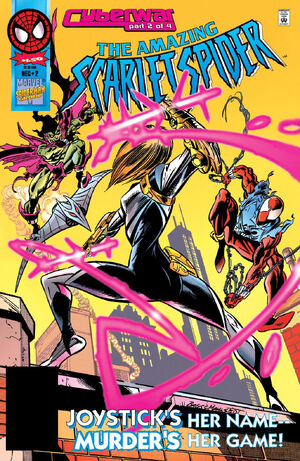 Appearing in "Caught in the Game!"Edit

Synopsis for "Caught in the Game!"Edit

In Paris, Great Game referee Henri gives Joystick, fresh off her defeat of El Toro Negro, her new assignment: a noncombatant called the Scarlet Spider. At Club Noir, Ben makes a date with Carrie Bradley. Rachel tells Ben she quit her waitress job. Meanwhile, Seward, his consciousness stuck in cyberspace, investigates Doc Ock's computer files while Ock and the Master Programmer use VR to summon up Stunner. Ben, now one of Mr. Tso's bodyguards (ScarS #1, '95) is sent to rough up Bugle reporter Ken Ellis. Joystick also seeks Ellis to find Scarlet but meets Phil Urich at the Bugle instead. Phil sends Ellis on a wild goose chase but Joystick and Ben both follow as does Phil in his Green Goblin costume. They all come together on the docks where Joystick attacks Scarlet while the Goblin keeps Ellis safe. Joystick fells Scarlet but must, according to Great Game rules, retreat to allow the noncombatant Spider time to prepare a defense. The fight makes Ben late for his date and Carrie dumps him. In Paris, El Toro Negro attacks Henri. He doesn't care if Joystick beat him fair and square. He wants personal revenge.

Retrieved from "https://heykidscomics.fandom.com/wiki/Amazing_Scarlet_Spider_Vol_1_2?oldid=1410173"
Community content is available under CC-BY-SA unless otherwise noted.