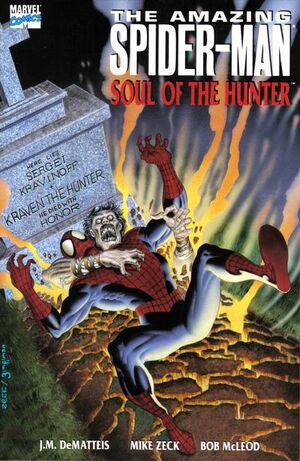 Appearing in "Soul of the Hunter"Edit

Synopsis for "Soul of the Hunter"Edit

Roger Hochberg's mother has died and Peter and MJ attend the funeral, causing Peter to suffer flashbacks to his two weeks spent buried alive. Peter does some web-slinging to clear his head, but it doesn't help; and neither do MJ's efforts to get him to open up about the experience. That night, Peter dreams that an entity and Kraven's spirit seek his help to free Kraven from eternal torment. Angered, Peter refuses and finds himself in his living room. He tells a concerned MJ and she tells him it's most likely his over-developed sense of responsibility acting out what he won't vocalize. Looking to test that theory, Spider-Man makes his way to Kraven's grave where he's again confronted by the entity and Kraven's spirit. Spidey agrees to help Kraven, letting his decaying remains rise up for Spidey to fight. Guilty over all the deaths he couldn't prevent, Spidey almost gives up and accepts death, but memories of what makes life worth living bring him back from the edge. He chooses life and the entity proclaims Kraven's spirit free. Spidey embraces Kraven and he fades away in his arms. Later, Pete and MJ visit Roger. He tells them he was never very religious but he has this feeling his mother's spirit is nearby, telling him she's in a good place. "Crazy, huh?" he asks Pete who replies, "I don't think it's crazy at all." At the cemetery, Kraven's tombstone now reads, "Free at Last."

Retrieved from "https://heykidscomics.fandom.com/wiki/Amazing_Spider-Man:_Soul_of_the_Hunter_Vol_1_1?oldid=1723925"
Community content is available under CC-BY-SA unless otherwise noted.