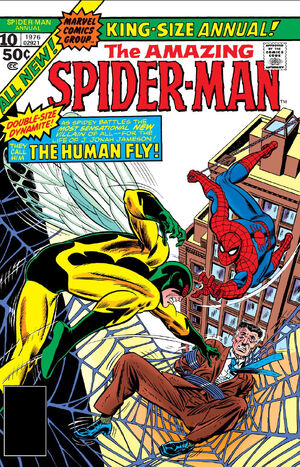 Appearing in "Step into my Parlor...said the Spider to the Fly!"Edit

Synopsis for "Step into my Parlor...said the Spider to the Fly!"Edit

Part I of this story is titled "Step into my Parlor..." This part of the story begins with J. Jonah Jameson as usual complaining to City Editor Joseph Robertson that he has devoted years exposing Spider-Man as a menace but that the dales figures for the Daily Bugle are dropping. Robertson says the reason for sales dropping is because of the Daily Globe making a comeback. He further says that the Globe scooped the Bugle on the White Tiger story and that it has a new publisher in the form of K. J. Clayton. Just then Peter Parker shows up explains to Jameson that he was sleeping and is told that he can't rest and that he should be out taking photos of Spider-Man. Parker explains to Jameson that he told him not to take any photos of Spider-Man because they were making him look too sympathetic. Then Parker puts an idea into Jameson's head when he tells him that most of Spider-Man's regular foes are all in jail. With that Jameson says he is going out and to put Parker on the list to receive a cigar scented Christmas card which leaves Robertson and Parker naturally perturbed at Jameson's sudden change of nature.[2]
Several hours later at the Waterfront we find the Police facing a hostage situation lead by Captain Bonner. Soon Spider-Man swings into action but is not interested in taking photos because it is only "measly little kidnappers".[3] By going unnoticed Spider-Man uses a web-line to sneak across into the building where the kidnappers are. Inside the Kidnappers hold an old man and a young woman hostage. The leader is Richard Deacon who the rest of the gang say that Captain Bonner had swore he had gone straight.[4] Suddenly the kidnappers hear a creak upstairs and Deacon sends one of his henchmen, Chino, to investigate. Chino bursting into an upstairs room with his gun ready suddenly comes across Spider-Man who makes a witty remark.[5] Spider-Man webs up Chino's mouth then webs away his gun and finally knocks him out.[6]
Then Spider-Man comes across the rest of the Gang by accidentally falling through the floor. He defeats them all except Richard Deacon who escapes with one of the hostages.[7] When Deacon and the Hostage are outside the Waterfront building they are confronted by the Police and Deacon's old Parole Officer Captain Bonner. Spider-Man quickly webs away the hostage and Deacon fires wildly towards the Webslinger.[8]
The Police are quick to fire at Deacon and he falls over the Pier into the water.[9] meanwhile at a secret laboratory further down the Waterfront we find Jameson talking to a certain Scientist Harlan Stillwell with a request to create a new superhero. Stillwell reminds Jameson that he also came to his brother Farley with a similar request which ended up in the creation of the Scorpion which led to his brother's death.[10] Stillwell is in desperate need of funding in order ro carry out this sort of research and accepts Jameson's offer.[11] Stillwell's research involves the common house fly (Musca Domestica) and the previous conversation about creating a superhero has been heard from Deacon as he is outside listening in. The seriously wounded Deacon comes inside and forces Stillwell to experiment on him. With the experimental equipment quickly setup it is not long before the process turns has turned Deacon into a human fly signaling the end of Part I.[12]
Part II entitled "...said the Spider to the Fly!" begins with Spider-Man swinging back to the Daily Bugle Building where we find Robertson asking Jameson whether he is all right when the Phone rings.[13] On the phone is Stillwell who tells Jameson that something has come up and that he better hurry over. Jameson again quickly makes his exit from the Bugle Building and hurries over only to find the lifeless body of Stillwell.[14] While running from the scene, he is captured by Deacon who has now assumed the identity of the Fly. The Fly takes Jameson hostage and flies to the Bugle. At the Bugle building he crashes through the window and administers his terms in rescuing Jameson that he wants to have a rematch with Spider-Man.[15] Spider-Man manages to fight the Fly and defeat him and get some photos for the Bugle.

Retrieved from "https://heykidscomics.fandom.com/wiki/Amazing_Spider-Man_Annual_Vol_1_10?oldid=1407921"
Community content is available under CC-BY-SA unless otherwise noted.