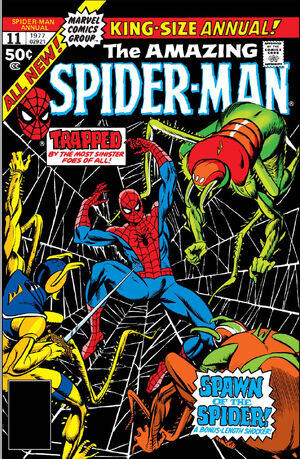 Appearing in "Spawn of the Spider"Edit

Synopsis for "Spawn of the Spider"Edit

Web-slinging through the city, Spider-Man happens upon a Grey Power protest which his Aunt May is participating in. When she's suddenly arrested, Spidey briefly considers rescuing Aunt May, but decides to do everything legal. Rushing to the court house as Peter Parker, he pays bail for his Aunt May, but is worried because the 200 dollar check he cut may bounce. After unsuccessfully getting an advance from J. Jonah Jameson, Mary Jane suggests that Peter join in in being an extra for a movie being filmed in the city titled "Spawn of the Spider". On the set, Peter witnesses one of the actors (in a ridiculous spider-monster costume) slip and are about to fall to the ground from the side of a building. Peter slips away and changes into Spider-Man and comes to the rescue. The Director fires the special effects man, Klemmer, and offers Spider-Man to take on the lead. Spidey agrees but demands to be paid in cash.

That night, someone vowing revenge against the production hires three crooks (strong man, tumbler, and acrobat) put on new spider-themed costumes and attack the production as the Spider-Squad. Sure enough, the Spider-Squad attacks the set, and get locked in a battle with Spider-Man. They manage to get away when they tag Spider-Man with a temporary poison and escape in a boat. Spider-Man recovers from the venom and goes after them, delaying the production by another day.

Realizing that Klemmer probably had something to do with it, he travels to Klemmer's apartment. There he is attacked by the Spider-Squad who one more manages to escape, however not before Spider-Man can tag their car with a spider-tracer. Tracking them to an abandoned barn, Spider-Man battles the Spider-Squad once more. In spite of being caught up in a giant fake spider-web, Spider-Man manages to defeat them all. When looking for Klemmer, Spider-Man finds him unconscious under a pile of hay. He suddenly realizes that someone is trying to frame Klemmer, and that he's probably walked right into a trap. Sure enough, when Spider-Man gets Klemmer and the Spider-Squad to safety, the building is blown up by Anton DeLionatus, the films financier who was hoping to cash in on the insurance of the failed project. Spider-Man tracks down DeLionatus, and easily defeats him and turns him over to the police.


Later, Peter Parker is down because he couldn't earn any money and that his check will surely bounce. All turns out well for Peter when the charges against Aunt May are dropped and the court nullifies the bail payment and returns the check to Peter.

Appearing in "Chaos at the Coffee Bean!"Edit

Synopsis for "Chaos at the Coffee Bean!"Edit

Peter and Mary Jane are out on a date when they happen by their old haunt, the Coffee Bean. They happen to show up on a night when up-and-coming musician Paul Cassidy is playing a gig. The performance is interrupted by the arrival of a gun toting thief who demands everyone turn over their valuables. Paul tries to be a hero and is taken "hostage", but upon leaving the Coffee Bean, we learn that Paul is in league with the thief. Peter sneaks out and changes into Spider-Man and goes after the crooks. However, when he returns back to the Coffee Bean, as Peter Parker, he finds Mary Jane is angry at him for leaving him behind to fend off sleeze balls who are trying to pick her up. The angry MJ leaves Peter, who once again chalks up his bad luck to the whole experience.

Retrieved from "https://heykidscomics.fandom.com/wiki/Amazing_Spider-Man_Annual_Vol_1_11?oldid=1407922"
Community content is available under CC-BY-SA unless otherwise noted.