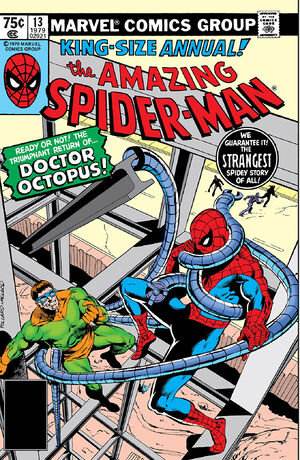 Appearing in "The Arms of Doctor Octopus!"Edit

Synopsis for "The Arms of Doctor Octopus!"Edit

Common thug Jimbo Ryan is responsible for the death of a secret service agent Kent Blake, and has stiffed Dr. Octopus on the delivery of special plans. While Dr. Octopus goes out looking for Ryan, Spider-Man tries to bust up his gang as well. After capturing his men, but not Ryan himself, Spider-Man is confronted by an associate of Blake who demands Spider-Man's help. When Spidey isn't sure about it, he tells them that Blake's death has been ruled as a suicide and that Spidey should check out Blake's funeral before he makes a decision. Going to the funeral as Peter Parker, he learns that Blake's widow has been denied her husband's life insurance as his death has been ruled as a suicide. Realizing that he has a responsibility to capture the killer Jimbo Ryan, Peter decides to do something as Spider-Man.

That night he is visited by Blake's associate at his apartment, where he reveals that he knows that Parker is really Spider-Man. Peter agrees to infiltrate Ryan's gang as hired muscle, which gets him into conflict with Dr. Octopus, who has come to get revenge against Ryan.

Thrown aside by Octopus, and dumped into the river by Ryan's goons, Peter changes into Spider-Man and chases after Octopus. He is brought to a construction site where he battles Dr. Octopus. When Blake's associate confronts Ryan, he almost falls off the side of building to his death when Spider-Man manages to save him, however Dr. Octopus manages to escape as a result. Spider-Man then turns Ryan over to the police where he confesses to killing Blake.

Later, when Peter goes to visit Kent's widow to learn if her insurance settlement was paid out, he is shown a picture of her late husband, and Peter is shocked to find that the man in the photograph was the same man who had been helping him try to capture Ryan.

This story is continued in Peter Parker, Spectacular Spider-Man Annual #1....

Appearing in "A Gallery of Spider-Man's Most Famous Foes!"Edit

Synopsis for "A Gallery of Spider-Man's Most Famous Foes!"Edit

A gallery of Spider-Man's foes, which include the Molten Man, Looter, Rhino, Shocker, Kingpin, Silvermane, Man-Mountain Marko, Prowler, and the Kangaroo

Floor plans and specifications of Peter Parker's apartment, the bullpens of the Daily Bugle, and Daily Globe newspapers, and a map of Empire State University.

Retrieved from "https://heykidscomics.fandom.com/wiki/Amazing_Spider-Man_Annual_Vol_1_13?oldid=1407923"
Community content is available under CC-BY-SA unless otherwise noted.