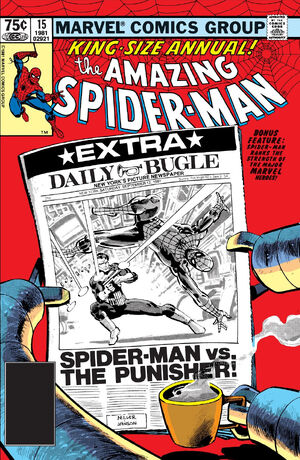 Appearing in "Spider-Man: Threat or Menace?"Edit

Synopsis for "Spider-Man: Threat or Menace?"Edit

J. Jonah Jameson and Joe Robertson look over a possible Bugle layout. JJJ wants to run another 'Spider-Man: Threat or Menace?" headline, but Robbie notes that readers are getting tired of that, and suggests the story that Peter and Ben Urich are working on. Across town, Peter photographs the Great Turhan. a sell-styled Swami, who is demonstrating the Dim Mak. a death touch, on a young girl. Before he can reverse the touch, the Punisher kills him. Spidey tackles the Punisher. but he shoots the web-slinger with a mercy bullet and escapes. At the morgue, the coroner pricks his finger on Turhan's ring and dies. The Punisher finds the body and the poison, but Dr. Octopus attacks him and makes off with Turhan's body. Spidey drops in at Turhan's office and questions one of his assistants who reveals Turhan's ring was gimmicked with a drug he and his brother were to deliver to Pier 43. There, the brother drops a canister of the poison into the river. The Punisher dispatches him and follows, finding Doc Ock in his hideout placing a blackmail call to the mayor. Ock pours a beaker of poison into Punisher's face causing him to fly into a rage, and attack the arriving Spidey. While fending off Punisher. Spidey reads Ock's notes and concocts an antidote, pouring it down the Punisher's throat, restoring his sanity, then taking it to the hospital to save the young girl poisoned by Turhan. Ock. meanwhile, infiltrates the Bugle to poison the ink in the printing press. Spidey webs the Punisher to a pier piling and gets to the Bugle in time to stop Ock. On Pier 43, the Punisher allows the police to arrest him so he can get at the criminals in jail. Back at the Bugle. Robbie convinces JJJ that telling the public about the poison ink plot will scare them out of ever buying the paper. Jonah goes with "Spider-Man: Threat or Menace?" after all, for which readers express their annoyance.

Appearing in "Just How Strong Is... Spider-Man?"Edit

Synopsis for "Just How Strong Is... Spider-Man?"Edit

Spider-Man ranks the strength of his fellow super-heroes.

Synopsis for "A Gallery of Spider-Man's Most Famous Foes!"Edit

Retrieved from "https://heykidscomics.fandom.com/wiki/Amazing_Spider-Man_Annual_Vol_1_15?oldid=1407926"
Community content is available under CC-BY-SA unless otherwise noted.