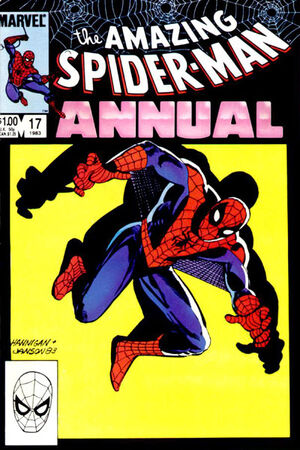 You've shown that now you're willing to sacrifice anyone --anything-- to save yourself! And I don't owe you anything anymore!

Appearing in "Heroes and Villains"Edit

Synopsis for "Heroes and Villains"Edit

Sleazy publisher Milton Farr is attacked at his offices by hoods who want the dirt he has on the Kingpin so they can use it against him. After Spider-Man breaks up a fencing operation run by Kingpin employee Mr. Gilbert, the Kingpin breaks Gilbert's legs. Peter drops in on a Midtown High reunion, running into a number of old friends. One is C.J. Vogel who once rescued him from bullies and is now a top comedy writer. However, Vogel once wrote sleazy books for Farr under the name Remington Colt. Fellow alum and small-time crook Louie Minelli knows this and blackmails Vogel into helping him in his plot to gain access to Farr's hidden safe, hoping to gain possession of the dirt on the Kingpin in order to get into the big man's good graces. Pete swings by the Bugle and learns that Farr has been kidnapped. Spidey disrupts Minelli's plans and Peter brings Vogel back to his apartment. Realizing that everyone is after the info in Farr's hidden files and that his identity as Remington Colt is there, Vogel goes to Farr's office, opens the safe and grabs the files. Minelli shows up with his goon along with the rival gang that kidnapped Farr, who has died under torture after revealing his safe's location under torture. Spidey breaks it all up but cannot prevent Vogel from burning the contents, protecting himself but also destroying the evidence against the Kingpin. Later, Minelli tries to join the Kingpin, telling him he did him a favor by arranging the elimination of Farr's files but the Kingpin, believing the safe's contents would have benefited him, sets Minelli up for Farr's death. In the end. Peter realizes that Vogel, who once helped him selflessly, now only looks out for himself. He tells Vogel, "I don't owe you anything anymore."

Retrieved from "https://heykidscomics.fandom.com/wiki/Amazing_Spider-Man_Annual_Vol_1_17?oldid=1407928"
Community content is available under CC-BY-SA unless otherwise noted.