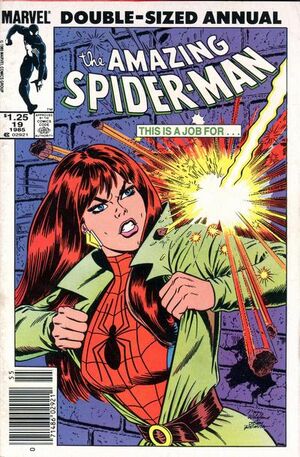 Peter's double life is taking its toll on Mary Jane. When he arrives late for dinner after breaking up a drug deal and developing pictures of it, she throws him out. Meanwhile. Alistaire Smythe plans revenge on Spider-Man for his father's death. The Kingpin gives him the opportunity by having him fix up Spider-Man's pink hat for Aunt May (from Web of Spider-Man #2), allowing him to put a tracer in it. However, Smythe spreads rumors that the Kingpin has gone soft on Spider-Man and gets fired. Awakening from a nightmare, Peter tries to call Mary Jane, forgetting she is having lunch with May and Anna. Mary Jane also tries to call Peter to apologize, but he has gone webslinging. Spider-Man remembers Mary Jane's plans, just as Smythe, in his new Spider-Slayer, tracks the hat to the restaurant just as Anna tries it on, resulting in her abduction. Trying to save her, Mary Jane ends up taken along for the ride. Spider-Man arrives and finds the tracer. Catching a few of Mary Jane's words to Anna, Smythe believes she is actually Spider-Man using a exoskeleton suit to give her powers and a man's appearance. In order to save her aunt and buy Spider-Man some time to find them, Mary Jane confesses and offers to take Smythe to her suit. Meanwhile, Spider-Man confronts Kingpin who leads him to Smythe. Spider-Man arrives at Smythe's warehouse and saves Anna. The police come soon after, having found a note left by Mary Jane. She leads Smythe to the Daily Bugle where Spider-Man finally catches up and rescues her. Spider-Man battles Smythe in his Spider-Slayer, finally taking it down by running it into Amtrak power lines. The next night Mary Jane treats Peter, Anna, and May to dinner with money she earned from the Bugle for a photo of Smythe. Soon after, she lets Peter know she's glad she knows he's Spider-Man, but jokes that doesn't mean she has to like it.

Retrieved from "https://heykidscomics.fandom.com/wiki/Amazing_Spider-Man_Annual_Vol_1_19?oldid=1407930"
Community content is available under CC-BY-SA unless otherwise noted.