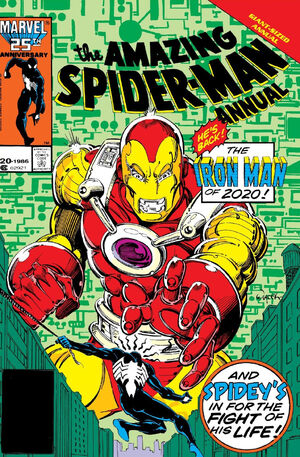 Appearing in "Man of the Year"Edit

Synopsis for "Man of the Year"Edit

In AD 2015, Iron Man (Arno Stark) is up for Man of the Year. Purely to fund his time machine, Arno reluctantly builds the "planet buster" bomb, a secretly developed nuclear weapon for the military. However, radical anti-war terrorist, Robert Saunders infiltrates the lab, activates the bomb, and takes Arno's wife and son prisoner. Iron Man seals the building, accidentally killing Saunders in the process. Needing the terrorist's retinal pattern to defuse the bomb, Arno learns that the reclusive Saunders' last known appearance was when he was 12 years old. Fortunately, Arno has a time machine. Meanwhile, back in time, Spider-Man stops Blizzard and his gang from robbing a bank. At the Bugle, Pete meets young Bobby Saunders, the son of a Bugle stockholder. Already back on the street, Blizzard stakes out the Bugle and kidnaps Bobby. Arno, as Iron Man, arrives via time machine, defeats Blizzard and prepares to scan Bobby's retinal pattern, when Spidey intervenes and accidentally smashes the retinal device. In the ensuing melee, Bobby is badly scarred. Enraged, Spider-Man furiously attacks Iron Man, nearly demolishing the armor until Arno is suddenly time-shifted back to 2015. Later, doctors declare Bobby permanently disfigured, the first step towards him becoming a bitter terrorist. Arno returns to 2015 to learn that the bomb has already gone off. His wife, son, Dr. Hawkins, employees, and countless others are dead.

Retrieved from "https://heykidscomics.fandom.com/wiki/Amazing_Spider-Man_Annual_Vol_1_20?oldid=1407931"
Community content is available under CC-BY-SA unless otherwise noted.