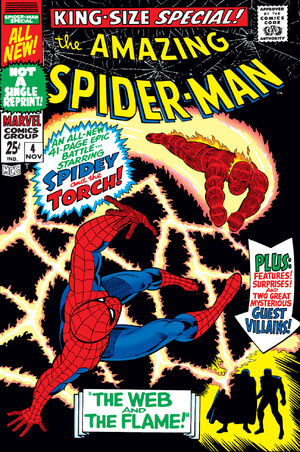 Appearing in "The Web and the Flame!"Edit

Synopsis for "The Web and the Flame!"Edit

Synopsis for "The Coffee Bean Barn!"Edit

A feature explaining Spider-Man's ability to stick to surfaces, and the different things that he can create with his webbing.

Another two-page spread, this one of Spider-Man's most recent foes: The Lizard, The Green Goblin, Sandman, The "New" Vulture (Blackie Drago), Kraven the Hunter, Dr. Octopus, the Rhino, and Electro.

Retrieved from "https://heykidscomics.fandom.com/wiki/Amazing_Spider-Man_Annual_Vol_1_4?oldid=1720421"
Community content is available under CC-BY-SA unless otherwise noted.