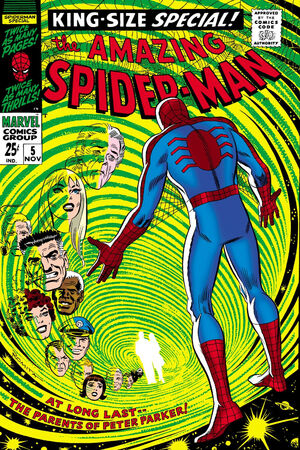 Appearing in "The Parents of Peter Parker!"Edit

Synopsis for "The Parents of Peter Parker!"Edit

When helping Aunt May move stuff around the attic, Peter accidentally breaks open a storage trunk filled with photos and other items belonging to his parents. Among these is a newspaper clipping that identifies that his parents were traitors to their country. Mortified, Peter questions his Aunt May, who tells him of his parents and the last time they saw them alive and how she and his Uncle Ben adopted him when they were killed.

Unable to shake this idea from his mind, Peter decides to learn the full story, and so as Spider-Man he seeks the Fantastic Four's aid in helping him travel to the last place his parents were reported seen alive: Algeria.

There he learns that his parents were supposedly spies who worked for the Red Skull (the Communist that was active in the 1950's, not the World War II Red Skull), and he came across their ID badges for the Skull's organization. Spider-Man also stumbles upon the Red Skull (the original Nazi Red Skull) himself, who is in the country to organize a new plot to take over the world.

Spider-Man clashes with the Skull and his men (who were under the employ of his Cold War replacement) and eventually learns from one of them that Richard and Mary Parker were murdered by the Red Skull when they refused to do their bidding. Believing his parents to have died heroes, he goes after the Red Skull once more and defeats him in battle. In the aftermath, he finds that his father's Red Skull ID card has been cracked in the battle, and finds a CIA identification card underneath, proving to Peter that his parents were secret government operatives. With evidence to clear his parents' names, Peter returns to the United States, happy to know that in reality his parents died serving their country instead of betraying it.

Appearing in "A Day at the Daily Bugle"Edit

Synopsis for "A Day at the Daily Bugle"Edit

A two page spread of Peter Parker day dreaming about using his spider-powers in a number of different sports.

Appearing in "Where It's At!"Edit

Synopsis for "Where It's At!"Edit

A map of Manhattan, showing where the regular places featured in Amazing Spider-Man are located. Places include: Peter Parker and Harry Osborn's apartment, The Daily Bugle, Aunt May's house, Empire State University, and the Coffee Bean.

Appearing in "This is Spidey As We Know Him But --"Edit

Synopsis for "This is Spidey As We Know Him But --"Edit

Drawings of Spider-Man that are in parody of various Sunday funny strips, including Dick Tracy, Micky Mouse, Superman, Archie and Charlie Brown.

Appearing in "There We Go-A-Plotting!"Edit

Synopsis for "There We Go-A-Plotting!"Edit

Retrieved from "https://heykidscomics.fandom.com/wiki/Amazing_Spider-Man_Annual_Vol_1_5?oldid=1407919"
Community content is available under CC-BY-SA unless otherwise noted.