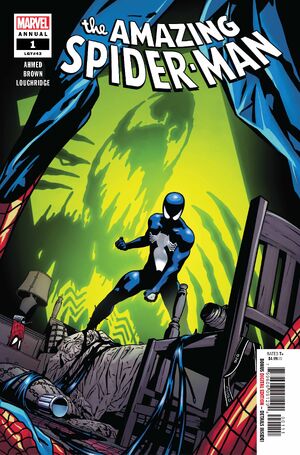 Appearing in "Ties That Bind"Edit

Synopsis for "Ties That Bind"Edit

The symbiote posing as Spider-Man's black suit recounts how it awakened from darkness in the midst of a secret war. Imprisoned and hungry for battle, it was unwittingly freed by Spider-Man and bonded to him, eventually returning with its "friend" to Earth. The symbiote happily notes that it's never had someone so kind as a host before and wants to permanently bond with him.

Spider-Man meets with Black Cat and gushes about how awesome his new alien costume is, but she remarks that its autonomous nature sounds creepy and advises he remove it until he can get Mister Fantastic to examine it, flirtatiously offering to help. They arrive at an old warehouse where Hammerhead and his gang are stashing high-power weaponry, crashing though the skylight. The symbiote notes that its host is brave and strong, but his mind is troubled with insignificant worries: Peter gets into an argument with Joe Robertson, having been out of touch while dealing with "personal business," and is put on-notice. Visiting his Aunt May, Peter brushes aside her concerns that something is wrong, causing her to scold him for lying to her; and Black Cat threatens to break up with him for being two hours late for their patrol, though Spider-Man apologizes and tells her he feels his life is spiraling out of control.

Noticing that even while he sleeps its host fears every minor decision will result in disaster, the symbiote eagerly decides to help by bonding to Peter while he sleeps and setting off into the night to fight crime. Noting that its host desires to protect those weaker than himself, the symbiote resolves to do the same; finding a woman in the midst of being mugged. The would-be purse-snatcher pulls a gun, but the symbiote webs his hand and proceeds to pummel him to death, the woman passing out in horror at the grotesque display of violence. Satisfied by a job well-done, the symbiote departs thinking to itself that its host would be pleased by what it's done. Peter awakens the following afternoon feeling exhausted despite sleeping most of the day away. Hearing a knock at his apartment door, he opens it to see Mary Jane Watson, who expresses concern at his disheveled appearance and invites him out for dinner. MJ asks Peter if he hasn't been sleeping, but Peter responds that he has; causing her to tell him to go see a doctor. As he heads home, the symbiote notes that he's consumed by thoughts regarding his old life and his old costume. Annoyed and determined to prove itself superior to his red-and-blues, the symbiote covers him again to do the work he would have wanted. Arriving at a jewelry store burglary, the symbiote viciously attacks the robbers, feeding Spider-Man dreams of saving his Uncle Ben and rescuing Gwen Stacy so that he won't wake up and be alarmed. Leaving the thugs' broken bodies behind it, the symbiote returns Peter to his bed, never to see the work it does using his body but believing he would be proud if he could.

Peter awakens from a nightmare influenced by the symbiote's nightly beat-downs, spotting Black Cat sitting in his window. Sitting on his bed, she asks what's bothering him and he tells her that he's suffering from a bizarre combination of nightmares, insomnia, narcolepsy, and uncharacteristic bloodlust. Black Cat, unnerved, suggests he see a doctor, but Peter says he hasn't had the time to do so or even take his costume to Reed for analysis because of how much time he's been spending asleep.

The symbiote takes over Peter again, noting there's more violence than usual. Coming across a shoot-out between Hammerhead's gang and a rival street-gang, the symbiote engages with its usual show of excess force. A young man caught up in the shootout emerges from his hiding place, noting that the symbiote resembles Spider-Man but that Spider-Man doesn't kill people. As he scolds it for killing the thugs, saying they had families and that he's classmates with some of their kids; the symbiote silently regards him, not fully understanding his words but impressed by his strength of will. Wondering if they stopped teaching new superheroes that killing is wrong, the young man thanks the symbiote for saving his life but notes that he could still be in danger if Hammerhead or the rival gang think he's responsible. Picking the young man up, the symbiote web-swings through the streets. Coming across a burning apartment, the young man spots an old man trapped in one of the upper floors and urges the symbiote to save him. Despite being afraid of the fire, the symbiote notes that its host wouldn't let fear stop him. Determined to follow his example - as to do any less would be akin to rejecting him - it creates a web-net to catch the old man, who is retrieved by firefighters. As the symbiote drops the young man off in an alley, he tells it that it's going to do alright as a hero. As he watches it depart, however, he is immediately approached by Hammerhead himself.

The next evening, desiring for reasons it doesn't understand to visit its new friend, the symbiote bonds to Peter as he sleeps despite his exhaustion. Having a sudden vision of him being killed by Hammerhead's crew, the symbiote arrives at the warehouse and immediately attacks the thugs present. Hammerhead himself arrives holding a high-tech flamethrower he calls the Slagger, while one of his thugs holds the symbiote's young friend hostage. The young man bites his captor's arm, but Hammerhead disregards him and blasts the symbiote with a torrent of blue flames. Incapacitated by the pain, the symbiote is helpless as Hammerhead prepares to fire a second blast... only for its friend to unplug the gun from its fuel tank. As Hammerhead turns to confront him, the symbiote gets up and the two of them get into a brawl. Unnerved by the symbiote's silence - save for angry hissing - Hammerhead is overwhelmed by its superior strength. Hammerhead surrenders and orders his men to stand down, but the symbiote prepares to kill him anyway - only stopping because its friend asks it to. As the symbiote and its friend leave, Hammerhead's men question whether they were even fighting Spider-Man. Groggily getting to his feet, Hammerhead tells them not to breathe a word about this to anyone.

Elsewhere, the young man thanks the symbiote for saving him but notes that it was the one who endangered him in the first place. Adding that it all evens out since they saved each other, the young man states that the symbiote could be a good hero if it chilled out and eased up on the gratuitous violence. Returning home, the symbiote has the epiphany that its nighttime excursions have been harmful to its host and decides to discontinue them so that he can rest and recover. The very next day, however, Spider-Man takes his black suit to the Fantastic Four; learning that it is a possibly-parasitic alien lifeform. As Spider-Man tries to remove it, the symbiote is horrified by this betrayal and desperately refuses to separate from him; stating that he needs it and it needs him. Reed pulls out a sonic blaster and blasts the symbiote, the pain forcing it off Spider-Man. Brooding on why its beloved host rejected it, the symbiote bitterly notes it's been hurt and imprisoned again by its only friend, who rejected and hates it when it only wanted to help him. Angry and vengeful, the symbiote manifests a fanged maw as it states that while Spider-Man may think he's done with it, it's not done with him.

Years ago, Spider-Man came back from an alien world with a fantastic new costume — one he eventually learned was a living alien symbiote looking to bond with him permanently! But before he rejected the costume that went on to become VENOM, many a night the symbiote would creep onto Peter, and unbeknownst to its host, take them out into the night!

Now, for the first time, see just what the symbiote steered Peter into during these mysterious nighttime excursions! Saladin Ahmed (BLACK BOLT) weaves an ALL-NEW nightmare fairy tale, illustrated by the incomparable Garry Brown, in what is sure to be a dream book for any Spider-Man fan!

Retrieved from "https://heykidscomics.fandom.com/wiki/Amazing_Spider-Man_Annual_Vol_4_1?oldid=1671433"
Community content is available under CC-BY-SA unless otherwise noted.