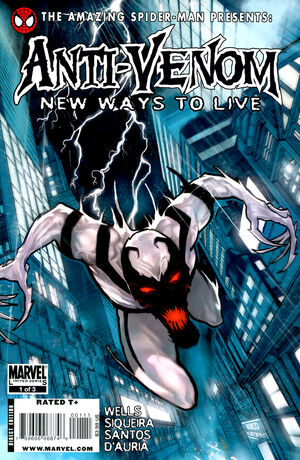 What’s Black, White and Dead all over?!?! From the pages of last year’s best-selling NEW WAYS TO DIE, Zeb Wells (AMAZING SPIDER-MAN; NEW MUTANTS) and Paulo Siqueira (AMAZING SPIDER-MAN, MS. MARVEL) bring you the story of Eddie Brock, the sallow symbiote known as Anti-Venom! With his life saved by Spider-Man, Eddie is cautiously walking the line between the darkness and light while trying to find his place in a world marked only by gray. The absolute last person he needs to run into is the Punisher. Unfortunately, the Punisher remembers Eddie as a cold-blooded killer, and that is just gonna hurt.

Retrieved from "https://heykidscomics.fandom.com/wiki/Amazing_Spider-Man_Presents:_Anti-Venom_-_New_Ways_To_Live_Vol_1_1?oldid=1722229"
Community content is available under CC-BY-SA unless otherwise noted.