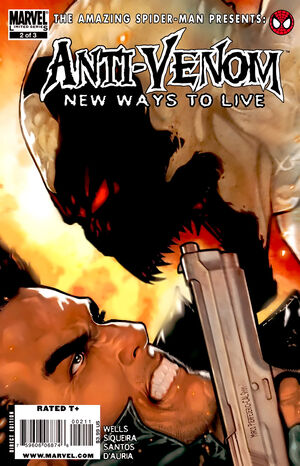 Eddie Brock is waging a one-man war against the guilty as the sin-purifying symbiote, Anti-Venom. But someone forgot to tell him about another one-man war, Frank Castle – the Punisher. As the streets erupt in violence, these two men can’t help but be on a collision course with those who prey on the innocent – and each other! Will anyone be left standing for issue #3?! Deputy Web-Head Zeb Wells and rising star Paulo Siqueira bring you a street fight you won’t forget – if you survive it!

Retrieved from "https://heykidscomics.fandom.com/wiki/Amazing_Spider-Man_Presents:_Anti-Venom_-_New_Ways_To_Live_Vol_1_2?oldid=1410179"
Community content is available under CC-BY-SA unless otherwise noted.