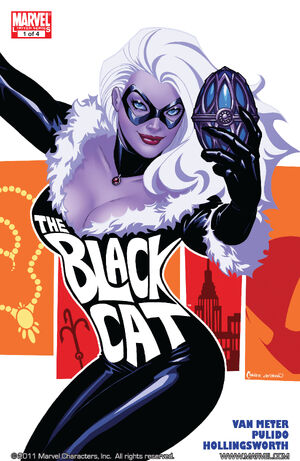 GRIM HUNT TIE-IN The Cat is B(l)ack in her own series and it’s international intrigue at its sexiest by Jen Van Meter (Hopeless Savages, JSA) and Javier Pulido (AMAZING SPIDER-MAN). As Spider-Man is stalked during the Grim Hunt, the world’s slyest, smartest and sneakiest jewel thief’s latest heist puts the Black Cat face-to-face with the family that has been terrorizing Spider-Man’s dreams and threatening those closest to him!

Retrieved from "https://heykidscomics.fandom.com/wiki/Amazing_Spider-Man_Presents:_Black_Cat_Vol_1_1?oldid=1410189"
Community content is available under CC-BY-SA unless otherwise noted.