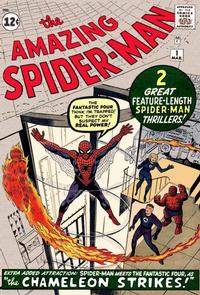 Synopsis for "Spider-Man Vs. the Chameleon!"Edit

Still looking for a way to use his powers to make money, Spider-Man decides to try and join the Fantastic Four. He enters the Baxter Building, escapes a "plexi-glass cage" trap, and battles the four heroes. After explaining his intentions, he learns that the Fantastic Four are a non-profit organization and earn no salaries. He leaves disappointed, vowing to make the group "look like pikers."

Evading capture, Spider-Man uses his elastic webbing to sling himself out over the harbor, then spins a web parachute to land safely. He grabs a boat and follows the Chameleon's helicopter to a waiting Soviet submarine. He quickly gains control of the helicopter, and he and the Chameleon return to the Lark Building. The Chameleon disguises himself as one of the security guards to avoid arrest, but after a brief battle he is captured. Unfortunately, during the battle the guards believe that Spider-Man is the Chameleon in disguise, forcing Spider-Man to flee. He departs, rueful of the way things never seem to turn out right.

Retrieved from "https://heykidscomics.fandom.com/wiki/Amazing_Spider-Man_Vol_1_1?oldid=1629800"
Community content is available under CC-BY-SA unless otherwise noted.