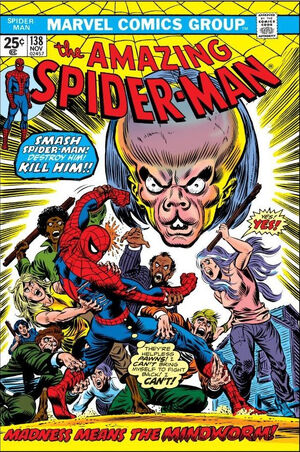 Following his battle with the Green Goblin (Harry Osborn), Peter Parker laments over the fact that as a result of their battle, the apartment they shared has been totaled. The landlord comes by as Peter mulls over what to do, and tears up the lease and tells Peter that he has to be out by the end of the day. Not wishing to worry his Aunt May, Peter checks through his list of friends and eventually is offered a place to stay with Flash Thompson. However, Peter soon learns that Flash lives in the suburb of Far Rockaway, which is so far removed from Manhattan, Peter begins to wonder how he'll manage to get around.

Living in an abandoned house near Flash Thompson's apartment lives the Mindworm, a mutant with mental powers that allowed him to feed off emotions of others. His abilities would lead to the death of his mother when he was young, and her death would cause his father to flee in fear, only to be struck by a car and die himself. The young boy grew up as a ward of an orphanage using his powers to ward off those who would treat him poorly, and use his mind powers to become very intelligent. He would relocate to this very house years before, and feed off the emotions of others, not repeating the same mistake with his mother, the number of people allowed for him to feed but not kill.

With the introduction of Peter Parker into the neighborhood, the heroes strong emotions became the subject of interest for the Mindworm. In order to gain access to these emotions, the Mindworm uses his powers to put everyone in the neighborhood but Peter under his control. Peter noticing the situation would change into Spider-Man and go into action. As Spidey fights off the hordes of the Mindworm, the police learn of the situation and send in a riot squad believing that something sinister may happen.

Taking his fight to the Mindworm directly, Spider-Man finds him an ample foe, until he claps both of his hands on either side of the head of the Mindworm. The resulting shock from the blow causes the Mindworm to cripple in defeat. Peter changes back to his civilian guise, and rejoins the others just as the police arrive to arrest the Mindworm.

Retrieved from "https://heykidscomics.fandom.com/wiki/Amazing_Spider-Man_Vol_1_138?oldid=1407299"
Community content is available under CC-BY-SA unless otherwise noted.