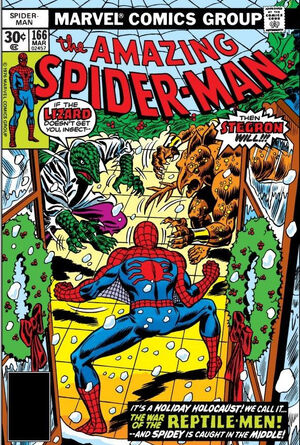 Appearing in "War of The Reptile-Men!"Edit

Synopsis for "War of The Reptile-Men!"Edit

Stegron appeared last in the previous issue. He appears next in Amazing Spider-Man #181 and Peter Parker, The Spectacular Spider-Man #33, both in flashbacks. His next actual appearance is in Lethal Foes Of Spider-Man #1.

Retrieved from "https://heykidscomics.fandom.com/wiki/Amazing_Spider-Man_Vol_1_166?oldid=1632719"
Community content is available under CC-BY-SA unless otherwise noted.