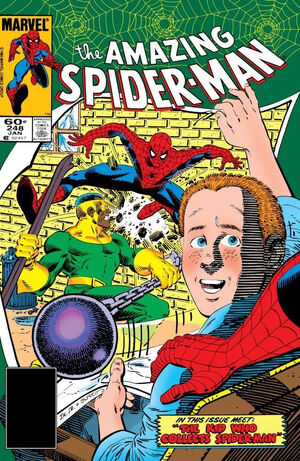 Synopsis for "The Kid Who Collects Spider-Man!"Edit

Timothy Harrison was different from most boys his age. While he enjoyed the majority of the normal pastimes of his fellow nine-year-olds, Tim had one particular interest that set him apart. Tim collected anything and everything to do with Spider-Man. So when he shut off the light in his room and prepared for an uneventful night of sleep, he was more excited than most would be when a certain wall-crawler decided to pay him a visit. Spider-Man first heard about Timothy from an article in the Daily Bugle by columnist Jacob Conover. Timothy had scrapbooks overflowing with newspaper and magazine articles about his idol, and even video footage from Spider-Man's early TV appearances. The newspaper profile on Timothy inspired Spidey to take a rare respite from crime-fighting and meet his number one fan face to face. But what Spider-Man hadn't taken into consideration was that Timothy was a New Yorker, and prone to being a bit skeptical. When Spidey lifted the boy and his bed above his head with hardly an effort, Tim soon realized that he was actually in the presence of his favorite hero.

Ecstatic about meeting his idol, Tim showed off his scrapbook collection to his visitor. They flipped through newspaper articles dating back to the beginning of Spider-Man's career, and discussed exactly how Spider-Man got his powers. Spidey even gave his biggest fan a tutorial on how his web-shooters worked. But Tim was a curious boy and wasn't about to pass up this once-in-a-lifetime opportunity. He asked Spider-Man exactly why he gave up a his life of fame and fortune and began fighting crime in the first place. And surprisingly, Spider-Man was honest with the young man. He told him about the Burglar he failed to stop, and about how that man went on to murder someone who was very close to him. Somehow Timothy understood, and couldn't begrudge his hero for the mistakes of his past.

The conversation grew lighter then, as the two continued their trip down memory lane. Tim showed Spider-Man bullets he had dug out of a wall of a bank on one occasion after some attempted robbers fired at Spidey and missed. The two even shared a good laugh at a scrapbook Tim kept of retractions that J. Jonah Jameson had been force to print in the Daily Bugle after he had been proven wrong on his assumptions about the wall-crawler. Soon Spider-Man realized how late it was getting, so he tucked the boy in, and walked away toward the window to make his exit. But just as Spider-Man was about to leave, Tim called out one last favor of the hero. He asked Spider-Man if he would take off his mask and show him his true face. And to his surprise, Spider-Man did just that.

Spider-Man told the boy that his real name was Peter Parker, that he was a photographer for the Daily Bugle, and that he has shot most of the pictures in the articles they had just flipped through. Amazed by the trust his hero placed in him, young Tim swore himself to secrecy, and gave Spider-Man - Peter Parker - a hug before he left. Spider-Man cast a few weblines, and then departed out of the boy's window. A second later, Spider-Man paused on a nearby wall and took a moment to collect himself . And then he swung into the night away from the Slocum-Brewer Cancer Clinic. Because Tim Harrison was different from most boys his age. Tim Harrison had been diagnosed with leukemia, and only had a few more weeks to live.

Spider-Man visits his number one fan, Timothy Harrison, and makes the compassionate decision to reveal his secret identity to the young boy.

By all appearances, The Amazing Spider-Man #248 looked like much of the other standard Super-Hero fare of the time period. The cover boasted an action-packed image of a hero fighting a villain, and seemed to promise a fairly commonplace battle between good and evil. The first story of the issue delivered just what was expected as Spider-Man battled it out with Thunderball, a member of the villainous Wrecking Crew. But it was the issue's back-up story that would elevate the comic book into something more memorable than the rest of the month's offerings. In fact, The Kid Who Collects Spider-Man! would go on to be one of the most memorable and most loved stories of all time. Influenced by the style of cartoonist and writer Will Eisner's comic book The Spirit, writer Roger Stern crafted a human-interest Spider-Man story in which neither Peter Parker nor his web-headed ego would be the focus of the tale. Instead, Stern used Spider-Man merely as a supporting character, yet still managed to throw in a shocking climax and a twist ending that fans still discuss to this day. This special story is regarded by many fans as one of the greatest Spider-Man yarns ever told.

Retrieved from "https://heykidscomics.fandom.com/wiki/Amazing_Spider-Man_Vol_1_248?oldid=1728796"
Community content is available under CC-BY-SA unless otherwise noted.