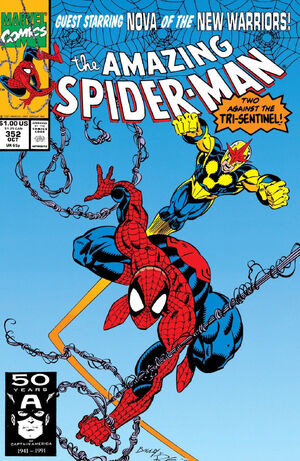 Once again the foundation's forced to abandon expensive resources! -- Because of Spider-Man!

While investigating a Life Foundation facility in New Jersey, Spider-Man and Nova had discovered that Carlton Drake rebuilt the Tri-Sentinel. When the massive robot was activated, it ignored its new directives to follow out those originally programmed by Loki, destruction of the Earth.[Continuity 1] Their attempts to stop the Tri-Sentinel so far have failed. Nova has been wrapped up in the robot's wrist coils while Spider-Man attempted to get inside the Tri-Sentinel's head and activate a fail-safe that the Life Foundation had installed. Unfortunately for the wall-crawler, a force cylinder closed around him and began filling with gas. As the cylinder runs from the ceiling to the floor, Spider-Man figures the best way out is to smash his way through the floor to try and get at the container that contains Antartic Vibranium. However, down below, the web-slinger is surprised when the components of the Tri-Sentinel begin attacking him. While outside, Nova has broken free, but it knocked aside by the Tri-Sentinel. With the immediate threat dealt with, the robot then flies off. Watching this, Carlton Drake orders his staff to destroy all the data they have on their mountain bunker and abandon the facility so nothing can be tied back to the Life Foundation. Watching the Tri-Sentinel fly away, Carlton Drake is furious that his business operations were interfered with by Spider-Man for the second time.[Continuity 2]

Meanwhile, Nova has recovered from the Tri-Sentinel's blow and remembers that Spider-Man is still inside the robot. He takes off after the Tri-Sentinel in the hopes of saving Spider-Man, but he grimly fears the worst. Inside the Tri-Sentinel, Spider-Man makes his way to the abdomen area of the robot where the central processing unit is stored.[Continuity 3] He hopes to tamper with the robot's programming in order to slow down its approach to a Long Island nuclear plant. Unfortunately, the Tri-Sentinel anticipates this and constrains Spider-Man in some coils. However, the Tri-Sentinel does decide to land and continue the rest of the way on foot. By this point, Nova manages to catch up to the Tri-Sentinel. Detecting his presence, the robot blasts Nova with its eye beams. Nova is surprised that the beams from the robot actually hurt. Back inside, Spider-Man tries to break free from the coils, but the combination of technology and magic make them even more durable. Restrained by the coils, Spider-Man helplessly watches as the bolts in a nearby wall begin shaking loose.

Back at the Life Foundation facility, Carlton Drake is informed by one of his guards that one of the demonstration discs that detail the facility to potential buyers has been missing and that they were stored in the room where Nova was captured. Deducing that Nova has the disc, he orders a tactical team out to either reclaim or destroy the disc. While en route to Long Island, Nova is forced to cease attacking the Tri-Sentinel in order to save a couple who happen to be in the robot's path. Inside, manages to shift his body enough that when the rivets shoot off the wall at him, they hit the coils, breaking him free in the process. As Spider-Man fights his way down to the CPU, Nova continues to follow after the robot as it approaches Manhattan. However, he is soon ambushed by a Life Foundation ship. Nova decides to use this to his advantage and flies so fast that he makes the ship blast the Tri-Sentinel by mistake. As expected, the Sentinel deflects the blast and turns its attention to the ship. The ship flies out of the way. It then manages to hit Nova with a magnetic blast. The blast is so powerful, it goes past the hero and also strikes the Tri-Sentinel, causing it to stop in its tracks. Realizing that they found a weakness, he takes control of the ship and orders its crew to continue blasting the Tri-Sentinel.

Inside, Spider-Man notices that something has stopped the Sentinel. Knowing that it will eventually adapt an immunity to this attack, he needs to act quickly. Ripping his way up through the ceiling, he gets into the chamber where the container of Antarctic Vibranium has been stored. Although the Tri-Sentinel tries to seal Spider-Man in another force bubble, it is a second too late allowing Spider-Man to open the container. With the Antarctic Vibranium released, it's rays begin melting down the Tri-Sentinel. Realizing that he could be hurt by the rays as well he makes a run for it. The wall-crawler just barely makes it out as the Tri-Sentinel uses all its power to destroy the Vibranium. However, the only thing the Tri-Sentinel succeeds in doing is obliterating itself. In the aftermath of the battle, Nova reveals the data disc but has determined that it had been erased by the magnetic beams from the Life Foundation ship. He blames himself for not telling Spider-Man about it sooner or hiding it somewhere safe. Spider-Man tells Nova not to feel bad about it as heroes make mistakes. Nova feels better, admits that since joining the New Warriors he is learning more about being a team player.[Continuity 4] He thinks that he should start applying this to other aspects of his life, including friends like Spider-Man.

Retrieved from "https://heykidscomics.fandom.com/wiki/Amazing_Spider-Man_Vol_1_352?oldid=1681971"
Community content is available under CC-BY-SA unless otherwise noted.