Start a Wiki
Part of the 'One More Day' event 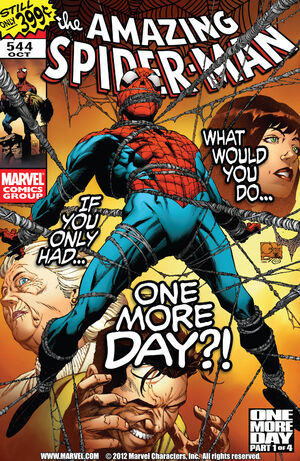 Any direct help I gave to you could be tracked back to me. I could be held liable for aiding and abetting a known criminal. It would undermine everything I've been trying to build since the war. The stakes are bigger than you, or me...or even May.

Appearing in "One More Day" Part 1 of 4Edit

Synopsis for "One More Day" Part 1 of 4Edit

With Aunt May checked into the hospital under a false name, Peter has a hard time dealing with the fact that without proper medical insurance, May will have to be put in the welfare wing of the hospital. Combined with the fact that she is not likely to survive, Peter is wracked with guilt over putting his aunt in this condition that he will not allow her to die in some welfare ward. Dr. Fine deduces Peter's true identity, and is sympathetic to Peter's plight because Spider-Man once saved an uncle of his, and he gives Peter a chance to find the money.

With nowhere else to turn, Peter tries to appeal to Tony Stark, breaking into Avengers Tower to ask him for financial help. Iron Man attacks the intruder and they both break into a heated battle, Iron Man determined to bring Peter in for going against the Super-Human Registration Act. However, Peter manages to incapacitate Iron Man with a fury of webbing. With Iron Man temporarily subdued, Tony refuses to help Peter because in doing so, he would be aiding and abetting a criminal. However, Peter's parting words about May's state strike a chord with Tony, who tells Peter to leave so he could be with his aunt, but next time he will bring him down regardless.

Tony decides to help out in an unexpected way: by giving Jarvis a large cash deposit. The Avengers butler (and May's lover) goes down to the hospital to insure and pay for her medical treatment. However, the Dr. Fine tells Peter that May's condition is terminal and any treatment they give her will only be to help ease her suffering. Not wishing his Aunt May to die, Peter decides to appeal to those who may have the power to save May's life. Peter kisses Mary Jane goodbye and swings off on a quest to save May's life.

An up-to-date profile of Spider-Man to November 2007.

Retrieved from "https://heykidscomics.fandom.com/wiki/Amazing_Spider-Man_Vol_1_544?oldid=1407649"
Community content is available under CC-BY-SA unless otherwise noted.