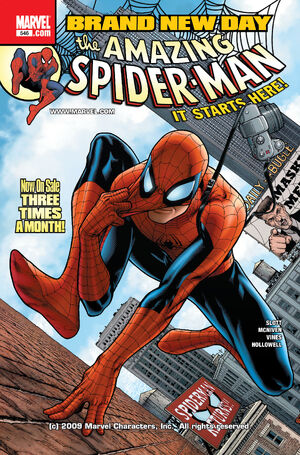 AMAZING! AMAZING! AMAZING! This is it, Arachnophiles!!!! Prepare for what promises to be the most pulse-pounding piece of four color fiction to be delivered unto the Mighty Marvel Minions in decades! You asked for more Spidey! You demanded it! And, by Buckley, you're gonna get it! After the devastatingly heartwarming events of ONE MORE DAY, Peter Parker puts the past behind him and sets forth on a BRAND NEW DAY! Starting with Amazing Spider-Man #546, you now have THREE times the action! THREE times the villains! THREE times the danger! Amazing Spider-Man – Now 3 times every month! Bank on it, buck-o! And if that weren't enough: ASM #546 goes double-sized to bring you back-up features that introduce you to the new players in the lives of Peter and his family!

Someone hijacks a truck full of explosives which Jackpot stops.

Appearing in "The Astonishing Aunt May!"Edit

Synopsis for "The Astonishing Aunt May!"Edit

At the shelter Aunt May protects a homeless man by the name of freak.

Appearing in "Harry and the Hollisters"Edit

Synopsis for "Harry and the Hollisters"Edit

Retrieved from "https://heykidscomics.fandom.com/wiki/Amazing_Spider-Man_Vol_1_546?oldid=1727857"
Community content is available under CC-BY-SA unless otherwise noted.