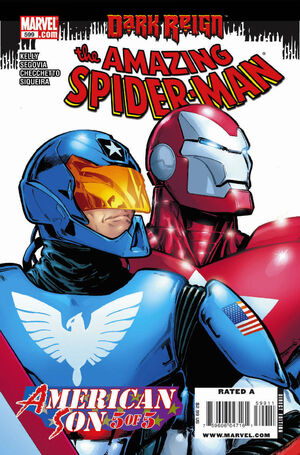 AMERICAN SON CONCLUDES! It’s the ultimate battle between friend and family as Spidey’s battle against the Iron Patriot and his Dark Avengers leaves one man with a choice too painful to contemplate. Plus, with wedding plans at high-fervor, Pete’s identity stands revealed to the person who stands to be most changed by the information.

Retrieved from "https://heykidscomics.fandom.com/wiki/Amazing_Spider-Man_Vol_1_599?oldid=1407708"
Community content is available under CC-BY-SA unless otherwise noted.